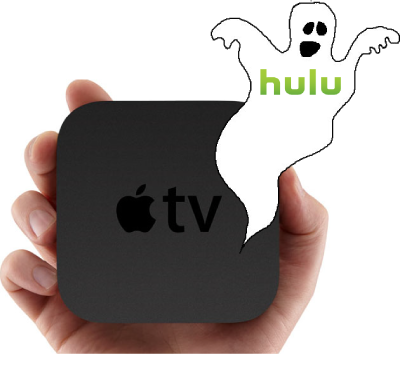 It’s only fitting that, on Halloween night, we find out the reason streaming video service Hulu Plus has yet to make its way to the Apple TV is that Apple is apparently scared of the competition.

Hulu could take business away from Apple’s TV show and movie purchases via iTunes. Apple’s $99 set-top streaming media box was also recently upgraded to permit  customers to take advantage of past purchases, which can be downloaded through Apple TV’s iTunes store using Apple’s iCloud service.

A native Hulu Plus app for Apple TV has been ready to roll out to users for at least a month, according to a report from 9 to 5 Mac. However, the development is on hold despite the absence of any technical problems.

Although Apple TV allows a native app from streaming video service Netflix, it isn’t much of a threat. Netflix does have a large TV offering but its prevented from streaming the most recent season of all TV shows currently on the air.

Apple also restricts the Hulu Plus iOS applications for the iPhone and iPad. The iPad version is unable to take advantage of high-definition video playback when devices owners use an HDMI iPad adapter cable with their television sets. As for the iPhone version, users are unable to use the new Airplay feature, which lets people mirror their phone’s screen with a television screen that’s connected to an Apple TV.

Another reason Apple might have delayed Hulu Plus on Apple TV could be the streaming service’s efforts to sell itself during the last few months. Hulu’s owners — News Corp., Disney, Comcast and Providence Equity Partners — initially put the service up for sale in June but eventually decided to call off the auction. Some of the potential bidders in that auction included direct Apple competitors like Google. Apple could just as easily have waited to see how the situation played out before agreeing to add the service to Apple TV.