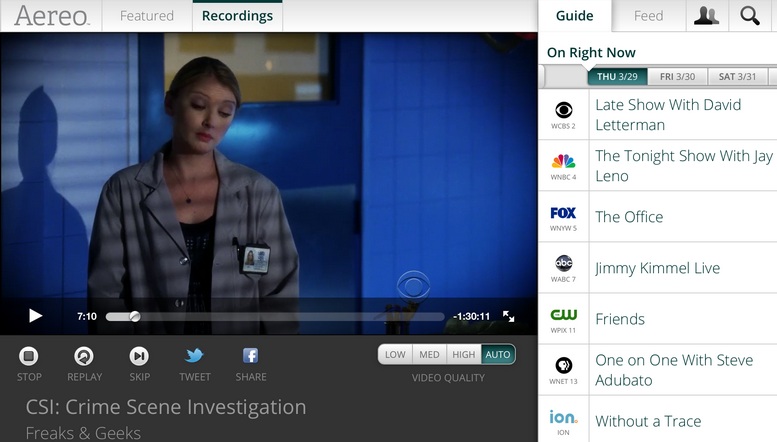 Aereo lets you watch free, over-the-air local TV streamed on the Internet. It also lets you record content for later viewing, like a DVR in the cloud.

The Barry Diller-backed company, which is already operational in New York City, announced yesterday that it had raised an additional $38 million to expand its Internet-based TV service to 22 more cities.

Aereo subscribers have individual antennas in Aereo’s facilities, and they can direct Aereo’s cloud-based DVRs to record the content that they want. No specialized hardware is necessary on the consumer end.

At a time when companies like Netflix, Amazon, and Google have been comfortable extinguishing consumers’ fair use and first-sale rights, Aereo is trying to push the envelope. I’ve argued before that innovation like YouTube would never come from inside a large company. Once companies get to a certain size, they become risk averse as lawyers tell them all the things they shouldn’t do. And business people are willing to concede things that favor consumers in exchange for more favorable terms, such as Netflix agreeing to delay renting new releases of DVDs for weeks, even though under the first-sale doctrine they can rent them on the first day.

Aereo shows the kind of chutzpah that only small innovators can. It is pushing for a broad interpretation of fair use rights, an interpretation that is relevant to the 21st century. It shouldn’t matter if you have a physical device in your home or you pay someone else to host a device in their facilities.

Beyond that, it’s a good product. I had a chance to use it when I was visiting New York City. (They’re being extra careful and not even letting reporters and analysts try it remotely.) Unlike a DVR, there’s no hardware to buy and configure. Unlike Hulu plus, you’re not subject to the whims of programmers that tell Hulu when and for how long a program can be made available. If it aired on live TV in your local market, you can record it and watch it.

This is especially important for things like live over-the-air sports, which are typically impossible to stream legally. The interface is elegant and easy to use. Aereo offers a range of plans, including $1 a day and $8 a month. A comparable level of service from a cable company would cost 3 to 4 times that. At a time when cable and satellite bills are rapidly rising, Aereo provides an inexpensive alternative.

If Aereo were to come to San Francisco, I’d drop my Comcast service in a heartbeat. (Unfortunately, San Francisco isn’t among the 22 cities in Aereo’s announced expansion.)

The cable and satellite companies aren’t entirely to blame for the rapidly rising prices of pay TV. Those price increases are driven in part by rising costs from programmers. Programming costs are driven in large part by the increased conglomeratization of programmers and rights fees to sports leagues. You want Comedy Central and MTV on your cable system? You’re also going to have to pay us for Logo. ESPN in particular and sports programming in general is a substantial tax on every pay TV household, whether they watch sports or not. Of the top 10 most expensive cable networks (measured by viewership), all 10 of them are sports networks, according to SNL Kagan, which researches this stuff.

If Aereo is successful in getting traction, it may force cable and satellite operators to offer other, less costly alternatives.

Although a lot of pundits vastly overestimate the benefits of unbundling channels — just because the cable company pays roughly $4 for ESPN or about 50 cents for CNN doesn’t mean you could buy it individually for that price — the current system has led to too much channel and bundle bloat.

Aereo also offers an outlet for smaller programmers that aren’t part of companies like Disney, Viacom, and TimeWarner to get more distribution. In December, Aereo announced that Bloomberg TV would be added to its lineup.

From a legal standpoint, Aereo isn’t out of the woods yet. It managed to prevent an injunction that would have shut it down. But many programmers will fight hard to either shut it down or force it to pay the kinds of fees that cable and satellite companies pay. Even if it gets past the legal hurdles, acquiring customers for a monthly subscription service that is hard to explain is a real challenge. (Just ask TiVo.)

Whether it will ever be a big commercial success is a huge, open question. I think the odds are very much against it. But I have to root for a company that is pushing to bring the law into the 21st century. And I have my credit card ready for when Aereo does come to San Francisco.