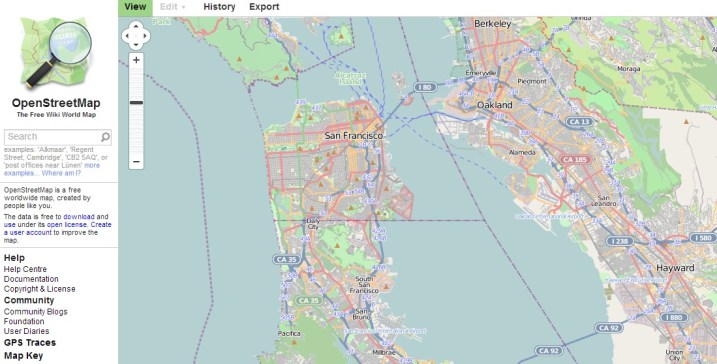 Over the summer, Google announced “the next dimension of Google Maps,” which was basically 3D integration and offline caching. (Believe it or not, Google already announced caching a year ago, albeit in a much quieter fashion.) Just recently, we saw Apple predictably unveil its own Maps app for iOS 6. Unfortunately for Apple, the reviews weren’t exactly glowing. For those fascinated by location services and mapping technologies, this is a key moment. Who will reign supreme — Google or Apple?

Often forgotten in the great Map war of 2012 is another challenger — a platform that is far more suited for the ever-evolving needs of developers and the services they’re building, or one day hope to build.

That platform, OpenStreetMap, is known as the “Wikipedia of maps.” It makes location data editable, more detailed, interactive and, importantly, open for everyone. Apple (hey now), Wikipedia (of course), and Foursquare have recently integrated OSM into their services, and it’s a trend that will only continue with Google charging high-volume users of its Maps APIs (Google has walked this back a bit, though, hoping to preclude defections). OpenStreetMap is, as they say, the future.

Of course, this is a very utopian view. Everyone touts open and collaborative data as a democratizing force, but if you’re a developer or startup considering incorporating OpenStreetMap into your offering, the perceptible benefits need to be clearer and much more explicit.

For that reason, here are three simple yet powerful reasons OpenStreetMap boasts over 750,000 users:

1. On-The-Ground Granularity. OpenStreetMap is the only globally crowdsourced map available today, making its potential for unrivalled quality a key differentiator. With hundreds of thousands of contributors, the data dynamically and constantly evolves — just as places do. Locations are rarely fixed or stable. They change and progress over time. No other service or platform can immediately provide developers with the real-time, on-the-ground granularity of OpenStreetMap.

Also important is firsthand influence. Mappers who edit the data have often had personal interactions with a place or locale. They know locations intimately, making their contributions detailed, rich, and hyperlocal. This means more accurate, “fresh” maps for users and an enhanced experience, which is critical for successful services. Plus, when you consider that more and more startups and services are focused on providing hyperlocal functionality and features, having hyperlocal data is a necessity. Only OpenStreetMap’s army of contributors can provide that. Traditional corporate map providers TeleAtlas (TomTom) and Navteq (Nokia) are painfully aware of this.

2. It’s Flexible & Customizable. Google owns Google Maps. Unsurprisingly, this has an impact on what you can and cannot do with Google Maps. Google can constrain the way you visually render and showcase its mapping technology. Needless to say, this is suffocating for those interested in building their own services. This is what makes OpenStreetMap such a significant development for developers interested in offering location-based/aware features. Do with OpenStreetMap what you will both visually and design-wise — there are absolutely no limitations. Every map can be unique and rendered differently. This also speaks to the flexibility of OpenStreetMap more generally.

Beyond design, OpenStreetMap’s map attributes are infinite, making it possible for an endless number of special interest maps. Users can channel the data to build completely new maps that cater to a specific theme or concept, creating “thematic” maps for different uses, such as walking, hiking, bicycling, routes for those with disabilities, and more.

3. Ownership & Affordability. This, of course, cannot be overstated. OpenStreetMap is not Apple’s or Google’s. This means they can’t tell you how to use their APIs. But, importantly, it also means you don’t have to pay for it at all — whether you’re a heavy user or not. From Sonar to Yelp, use of the map will cost you nothing. Money is not a barrier to entry. In the end, your service will create value from the map (and not the other way around). Everyone talks about democratizing data — well, to the dismay of Google and Apple, this is it.

Some in the mapping space say otherwise, though. TomTom, keeping its own commercial interests in mind, recently criticized OpenStreetMap, claiming that the open-sourced nature of the platform makes it “wide open” to vandalism that can corrupt the data. However, the community that supports OpenStreetMap quickly called TomTom out on the falsities of its claims (talk about real-time collaboration).

Marcus Thielking is co-founder of Skobbler, a leading provider of mobile map-based solutions that uses OpenStreetMap. Prior to founding Skobbler in 2008, he worked for navigation systems specialist Navigon AG (recently acquired by Garmin), where he ultimately became head of corporate development.