The Wikimedia Foundation has emerged victorious in a lawsuit brought by a Germany-based screenwriter and movie director, who requested that her date of birth be removed from her German-language Wikipedia page.

Dr. Evelyn Schels filed a lawsuit in Germany back in May, and argued that her “general right of personality and her data protection rights were infringed because she did not consent to the publication of her date of birth in the Wikipedia article about her,” according to a statement from the Wikimedia Foundation. Interestingly, she also argued that by having her age published on a publicly accessible domain, she may be disadvantaged in her profession.

The Wikimedia Foundation argued that because Dr. Schels is famous, and her birthdate was garnered from a source that was already available to the public, the information should remain. And it seems the court agreed. 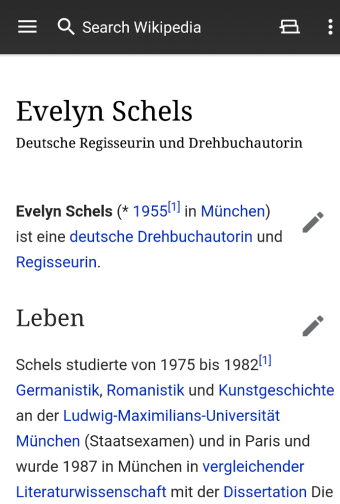 “The publication of the Claimant’s birth year in the online lexicon “Wikipedia” does not infringe upon her general right of personality or data protection law,” said the Amtsgericht München, a local court in Munich. It added that the Claimant is a “renowned producer of documentaries” who has published a documentary almost annually since 1987.

The court found that because Schels year of birth had been published in one of her own books, “it had to be clear to the Claimant from the start that this book, and the public knowledge of her birth date along with it, would not remain limited to a small circle of people interested in films, but be accessible in various libraries etc. to a circle of user unlimited in theory.”

This isn’t the first time an Internet organization has been targeted by spurious lawsuits seeking to prevent the revelation of someone’s age. In 2011, the Internet Movie Database (IMDb) was targeted by an anonymous actress who argued that by having her real age published on IMDb Pro, this was causing her to lose work. She lost in court to the Amazon-owned company in 2013, having been forced to shed her anonymity to pursue the case.

With the Wikipedia case, it’s not exactly clear how Dr. Schels’ age could be concealed on the page — after all, Wikipedia is a crowdsourced encyclopedia that can be updated by anyone, at any time.

However, both these stories help illustrate the disastrous impact of the so-called Streisand effect, whereby an individual or company attempts to conceal a piece of information from the public, and merely serves to draw greater attention to it.

Wikipedia’s woes in Germany aren’t over yet, though. In October, the Reiss-Engelhorn Museum in Mannheim served a lawsuit against the Wikimedia Foundation, and more recently, against Wikimedia Deutschland, over 17 photos of the museum’s works of art that have been uploaded to Wikimedia Commons. The Wikimedia Foundation has until December to file a response, but its argument is that the subjects in the photos are already freely available to view in the public domain.