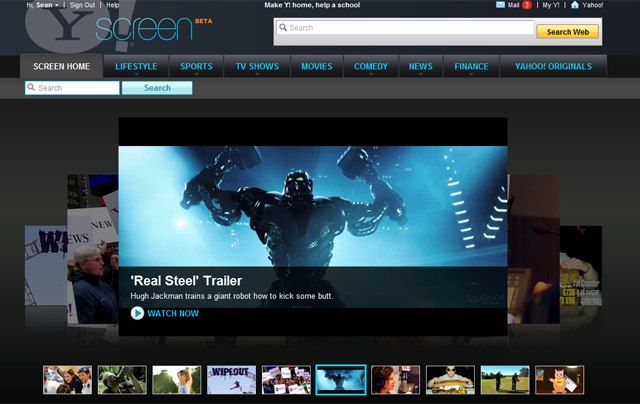 Although Yahoo is in turmoil after the ouster of CEO Carol Bartz, the company is still continuing to release digital products and trying to innovate. The company on Tuesday launched a new video site called Yahoo Screen that it will use to launch eight new original web shows and polish its overall video offerings.

Original online video is heating up, as web companies realize the advertising possibilities of homemade, branded content. Yahoo’s news follows AOL’s announcement yesterday that it would also expand its video products by launching more than 15 new original web series. Google is also expected to throw its hat into original video creation ring, after a report yesterday that it has set aside $100 million for YouTube programming. Yahoo, Google and AOL likely see original video series as a major opportunity to reach a new generation of web consumers who have embraced Netflix and Hulu and cut the cord on cable TV.

The new Yahoo Screen will replace Yahoo Video as the site’s primary video destination. Yahoo says the eight new original programs will be aimed primarily at women and feature actresses like Judy Greer and Niecy Nash, as well as documentarian Morgan Spurlock.

On top of that, the Yahoo Screen site will show licensed content from established content providers such as Fox News and Discovery. It also will license clips directly from Hulu, which is slightly peculiar since Yahoo was supposedly one of the top bidders for Hulu. Perhaps after Bartz’ exit, the company is no longer interested in picking up Hulu, and decided it would be easier to simply mimick Hulu’s strategies with its own site. Yahoo Screen even looks a lot like Hulu.

Yahoo’s push into video could also benefit the company’s just-announced partnership with ABC News. ABC News programming and content will find its way onto Yahoo Screen and help provide a variety of content that could keep users coming back.

Have you watched anything Yahoo Screen? Do you think it will help Yahoo?