Wikipedia may have helped kill the printed encyclopedia, but the online crowdsourced fountain of knowledge will soon be available in physical book form too.

From Aaaaa! to ZZZap! is a new exhibition from artist and programmer Michael Mandiberg running from June 18 to July 2 at Denny Gallery in New York. Mandiberg has created software that breaks down the entirety of the English-language Wikipedia database, creating thousands of volumes replete with covers, and uploads them ready to a print-on-demand service.

This project has been created with direct support from the Wikimedia Foundation, the not-for-profit behind the ubiquitous online encyclopedia, and self-publishing platform Lulu.com.

So how does something like this translate into an exhibition? Well, visitors will be able to witness the actual upload of Print Wikipedia to Lulu.com via a projection of the Lulu.com website, though a selection of Print Wikipedia volumes will also be made available to peruse on-site. The upload process will take at least 11 days, though it could run up to two full weeks.

Denny Gallery will also be open 24/7 for the opening weekend, “in recognition that the computer itself works continuously.” A separate computer monitor with the command line updates will be set up too, and the script will also be posted to the Print Wikipedia Twitter account after each volume has been uploaded. 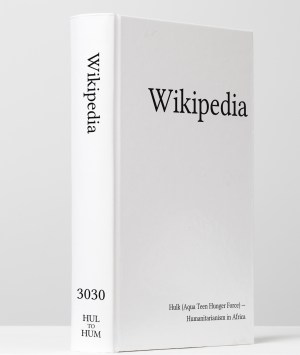 By Mandiberg’s own admission, the project is largely futile given the nature of Wikipedia — the gargantuan online knowledge base is constantly updated by millions of people around the world, thus rendering any printed version almost immediately obsolete.

“Print Wikipedia is both a utilitarian visualization of the largest accumulation of human knowledge and a poetic gesture towards the inhuman scale of big data,” explained Mandiberg. “Built on what is likely the largest appropriation ever made, it is also a work of found poetry that draws attention to the sheer size of Wikipedia’s content and the impossibility of rendering the encyclopedia as a material object in fixed form: Once a volume is printed, it is already out of date.”

While the project certainly seems more like a conceptual art installation than a genuine business initiative, people will be able to order physical copies of Wikipedia —  7,471 volumes of Wikipedia articles, consisting of 700 pages each, or 5,244,111 pages in total. The damage? $500,000 if you want the lot, but you can procure individual volumes for a mere $80.

The Wikimedia Foundation concedes that it doesn’t “expect anyone to purchase the whole set, though it is important that they could,” a spokesperson told VentureBeat.

The concept of Wikipedia as a physical printed product isn’t entirely new. As far back as 2008, the Wikimedia Foundation offered a print-on-demand service in conjunction with PediaPress, letting users create customized books filled with Wikipedia content, though this was intended for smaller-scale prints. The service was quietly discontinued last summer after shifting only 15,000 books. Last year, the team behind the PediaPress Wiki printing tool launched an audacious bid to crowdfund a printed version of the entire Wikipedia database, though it looks like that project was pulled, as the Indiegogo campaign page was deleted.

In 2012 a U.K. student created a huge single volume of hand-picked Wikipedia articles, but this amounted to just 0.01 percent of Wikipedia’s English-language content.