It’s worth noting here that the Google-owned video behemoth has offered a service called YouTube Music in a handful of markets for a few years already, but that is a slightly different proposition. The existing YouTube Music, which is only available in the U.S., Australia, New Zealand, Mexico, and South Korea, is a free ad-supported app that offers access to millions of audio- and video-based music recordings. You can also make it ad-free via a $10/month YouTube Red subscription and unlock a bunch of features, such as offline access and the ability to listen to music in the background when the YouTube app is minimized.

The new YouTube Music service largely follows that model, except it will now be available as a standalone subscription, and it will be launching in a bunch of new markets. It basically represents Google’s best attempt to take on the likes of Spotify and Apple Music around the world, after having failed to do so with its Google Play Music service, which will eventually be sunsetted and replaced with YouTube Music.

What you need to know

Google will usher in the new YouTube Music service on May 22, kicking off with its existing five markets: the U.S., Australia, New Zealand, Mexico, and South Korea. Over the next few weeks, the service will land in a bunch of new markets,  including Canada, the U.K., Austria, Denmark, Finland, France, Germany, Ireland, Italy, Norway, Russia, Spain, Sweden, and Switzerland.

Like Spotify, YouTube Music will offer an ad-supported free incarnation — minus some key features. For those, you will need to upgrade to a $9.99/month YouTube Music Premium subscription, which will serve you with offline access and — crucially — background listening. This is an essential feature, because you won’t be able to listen to YouTube Music and do other things on your phone at the same time without it.

So where does this leave Google Play Music? By way of a quick recap, Google Play Music is Google’s existing version of Spotify and Apple Music and is comparable to its rivals in just about every way. At first, Google will continue to offer Google Play Music and YouTube Music in tandem, though as noted the plan is to eventually replace the former with the newer incarnation.

For now, though, Google Play Music subscribers will be given a YouTube Music Premium membership automatically, and they will presumably be transitioned to YouTube Music over time.

It’s also worth mentioning podcasts, which are currently available through Google Play Music. Podcasts are insanely popular, which is why Spotify features direct support for searching, listening, and downloading podcasts directly through its app, while Apple offers a separate Podcasts app for this purpose. YouTube has made no mention of podcasts or whether it plans to support them through YouTube Music in the future.

A couple of cool new additions are worth noting here: YouTube Music will finally gain a native desktop application, similar to Spotify. And Google is continuing its artificial intelligence offensive with at least one very interesting new search feature. It seems that YouTube Music will tap the wonders of natural language processing (NLP) to let you find music based on a vague description. So if you remember the sound of a song but can’t remember it was “Young Folks” by Peter Bjorn and John, you can type in something like: “hipster song with the whistling” or even a few lines from the song.

YouTube Premium will also be expanded beyond its existing five markets to cover the same ground as the new YouTube Music service. At $11.99 per month, YouTube Premium will cost $2 more than Red, and it will include full ad-free access to the entire YouTube catalog of videos, in addition to YouTube Music Premium, and original video content such as Karate Kid spin-off Cobra Kai.

Existing YouTube Red subscribers may balk at the thought of paying an extra $2 per month, but Google said it’s going to lock in your existing price so you won’t actually pay more. 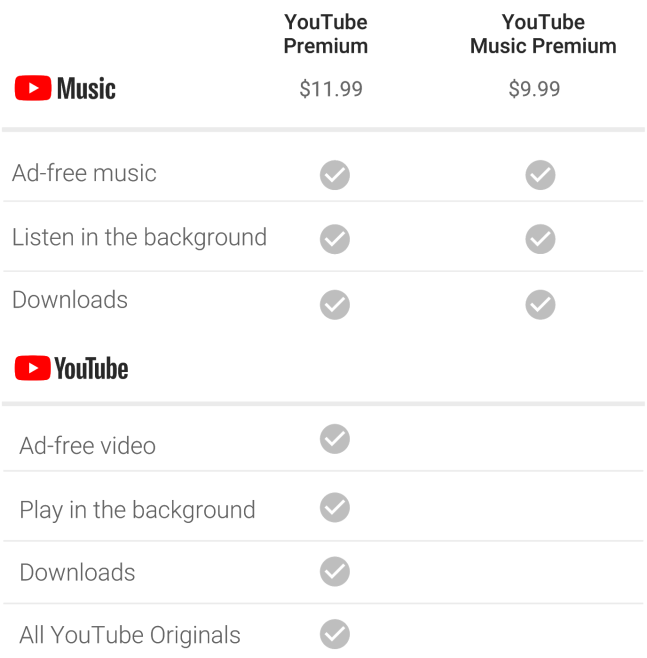 The main game-changer with today’s announcement is this: Globally, whether you’re on your own or at a party, you will now be able to listen to and watch all your favorite music within a single application. You won’t have to switch between apps when someone shouts: “Hey, you should see the video for this song, it’s wicked.” Given the amount of love millions of people have for music-streaming services such as Spotify and YouTube videos, YouTube Music is likely to prove popular when it begins rolling out in more markets. But it’s not clear yet to what extent consumers will be willing to ditch their Spotify and Apple Music subscriptions, though we’re sure both companies will be watching this launch with eager eyes.

These launches also begin to make a lot more sense given yesterday’s other big YouTube announcement: The company revealed that it is now using Content ID data to automatically display full music credits below videos and that it will also link to the official videos on YouTube Red (soon to be YouTube Premium). While this opens the door for Google to better promote and cross-sell its own services, it’s also designed to appease record labels, publishers, and rights holders — Google wants to demonstrate that it’s serious about crediting original music creators and owners.

“YouTube is committed to providing recognition to all of the people who contribute to the creative process, and this is just the beginning,” the company said. “Through our industry partnerships, we will expand the scope and quality of data to ensure all creators are credited as completely and accurately as possible.”