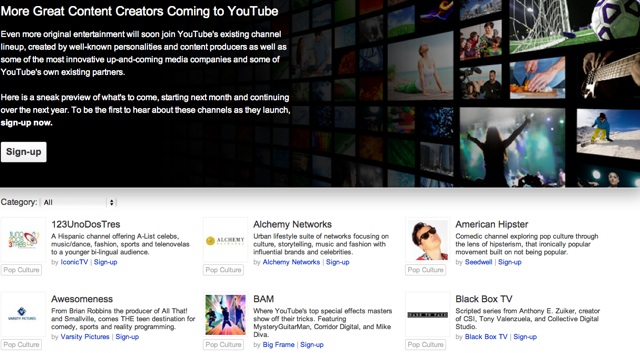 Google has officially announced plans to bring a slew of original content to YouTube, backed by some big names, but the news could also be huge for Google TV.

The company’s smart TV platform could certainly use a killer product to coincide with its recently announced update, which will include a newer version of Android and an apps marketplace. Google’s plans for original content channels, which would basically turn it into an alternative to traditional TV channels, seems like the perfect way to show off Google TV’s value as a unified hub of online and traditional content.

Google is reportedly spending upwards of $100 million on its original content plans, which include shows by well-known personalities like skateboarder Tony Hawk, comedian Rainn Wilson, and self-hulp guru Deepak Chopra. The apparent aim is to add more professional content to YouTube’s library, ultimately making it something more than a destination for user-created cat videos. Google is also offering a sweet deal to content creators: 55 percent of ad revenues (after it recoups its initial cash advances), the Wall Street Journal reports.

Google has already said that it’s building a new YouTube application specifically for Google TV, and I wouldn’t be surprised if its new original channels will be heavily featured. If the content is good enough, it could make consumers forget about the fact that broadcast networks (and by extension Hulu) are blocking GTV from video content on its websites, and it could entice new users to the platform.

It would also be the full realization of Google TV’s initial goal of combining online and traditional TV content. For all of its initial problems, Google TV is the only smart TV platform that makes the web instantly available a few keystrokes away from your favorite TV show. Instead of fighting with TV networks, Google would be better off positioning its own content alongside traditional TV. Eventually, consumers may not even be able to tell the difference between a show produced for TV and one made for YouTube.

But over time, Google TV could find its identity through YouTube’s original programming. Just like Android is more tightly integrated into Google’s services than any other mobile platform, GTV’s value would be far easier to appreciate as the premiere way to enjoy YouTube from the comfort of your couch.