If you haven’t heard of Pokémon Go by now, you’re probably living under a rock and I’m impressed with your ability to get online and read this article. Companies are jumping on the bandwagon, trying to capitalize on, or at least somehow highlight, the phenomenon. The latest to join the fray is none other than YouTube.

The Google-owned company has declared that Pokémon Go “is a unique video game phenomenon like no other.” More specifically, YouTube compared the game’s launch week with other blockbusters from 2016, and found that Pokémon Go not only racked up millions of hours of watchtime, it has consistently been one of the top 3 games on the site (trailing only Minecraft and Grand Theft Auto V) since its debut.

Comparing launch weeks to launch weeks, Pokémon Go received twice as much watchtime as Overwatch and three times as much as Tom Clancy’s The Division. At least when it comes to sharing clips of the game, Pokémon Go is already way ahead of the pack.

YouTube also highlighted the Google Maps April Fools’ Day prank from 2014, saying it “received a sharp uptick in views and watchtime” after Pokémon Go’s debut. Other big titles were musical tributes and clips from famous gamers.

One more statistic: According to YouTube search queries, Team Valor took an early lead, but was soon overtaken by Team Mystic. Both are running neck-and-neck ahead of Team Instinct: 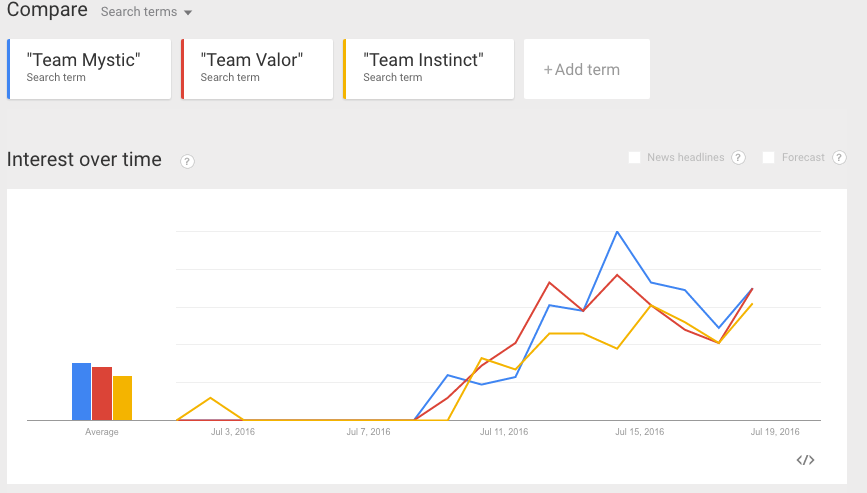 The game will have to peak eventually, but at least right now, it looks Pokémon Go is still growing like crazy. And that’s not a huge surprise, given Niantic wants to bring the game to 200 markets. It’s currently in 35.