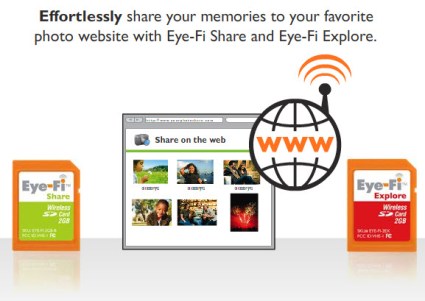 Eye-Fi has made a big splash with its camera memory chips, which can upload images directly to the web. Today, it’s expanding its product line to launch four-gigabyte flash memory cards that can upload video directly to YouTube and Flickr.

It’s a milestone for the Mountain View, Calif.-based company, which keeps on making it easier to move pictures and videos from cameras to the Internet, where they are far more likely to be viewed. According to comScore, consumers viewed more than 144 million videos online in 2008. More often than not, consumers are using digital cameras, rather than video cameras, to shoot their videos.

The new 4 gigabyte Eye-Fi Share Video ($79) and Eye-Fi Explore Video cards ($99) can upload photos and videos directly to any of 20 online photo sharing and social networking sites. The Eye-Fi Explore Video card can automatically tag photos with locations based on global positioning system (GPS) data. There are more than 10,000 Wi-Fi hot spots where you can upload. The new cards will be in stores later this month.

Eye-Fi already has its Eye-Fi Home card ($49, down from $79 earlier), Eye-Fi Share card ($59, down from $99). The photo-only Eye-Fi Explore card is being discontinued in favor of the video and photo combo version.

The company was founded in 2005 and its investors include LMS Capital, Opus Capital, Shasta Ventures and Translink Capital.