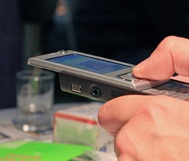 Coupons have always annoyed me. I love to save money as much as the next person, but not at the expense of carrying around massive amounts of clutter. I’m reminded of the episode from the last season of Seinfeld where George finds a coupon on the street, puts it in his wallet, and his wallet flies apart under the strain of too many coupons.

Well, coupons are now poised to enter the digital age. Advertisers are beginning to invest in mobile coupons, according to The New York Times. The idea is to have discounts sent to consumers via text messages or other means (more on this below), which the consumers would opt-in to receiving.

This move to digital could be a huge boon for coupons, and the advertising industry as a whole. Mobile coupon company Cellfire recently raised a new $12 million round while Modiv Media took $8 million for mobile marketing, including coupons.

A previous JupiterResearch report stated that 70 percent of consumers surveyed had no interest in using mobile coupons, but the mobile world is evolving quickly. Semacodes or QR codes, two dimensional square barcodes, are one example. Using a cellphone camera, a consumer simply takes a picture of one of these codes and a phone with the correct software can translate it into a coupon or a URL leading to where a coupon can be found. These ads are popular in Japan and can be found everywhere from coffee cups to billboards. Now Google is working with the technology in the U.S. under AdWords.

In the late 1990s several startups tried and failed to implement similar technologies, but the post-iPhone, pre-Android world is a very different place. Would anyone have imagined regularly browsing the Internet on a mobile phone in the late 1990s? No.

If they are already pushing it via AdWords, it might make sense for Google to include Semacode software as a part of its Android platform. Others, such as Neomedia, are working on software for the technology as well.

What makes more sense? Carrying around dozens of slips of paper in your pocket or transferring those over to your cellphone, a device you already need to anyway?