The U.S. and China currently have the world’s largest potential smartphone and tablet markets, but many other countries are ripe for wider smart-device adoption in 2012.

Flurry, a mobile analytics company, has crunched numbers from the past month to paint a picture of what the global smart-device market looks like now, and where it’s headed next. It identified what smart-device markets have the most potential for future revenue, making them fertile ground for everyone from equipment manufactures to app developers. 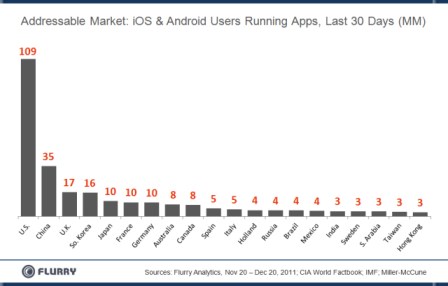 First, Flurry looked at which countries have the most active iOS and Android devices, using data from its own 140,000 apps running around the globe. It estimates there are 264 million active smartphones and tablets currently running these mobile operating systems. (The overall device count differs from the official numbers from Google and Apple because Flurry doesn’t include deactivated devices.) 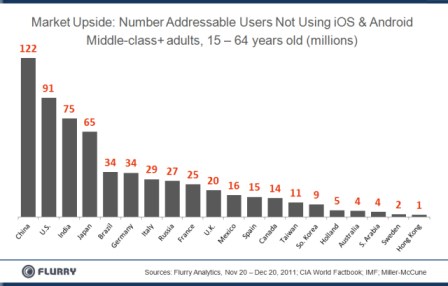 That shows who has already bought a device, but what about the next wave of smart-device consumers? To calculate where the market is heading, Flurry set up some parameters since comparing based on total population would lead to skewed results. Instead, it accounted for the age of various populations (“recognizing that children do not purchase devices”) and their disposable income. It used data from the IMF and a study of the world’s middle classes by Pepperdine University to calculate who can afford smart-devices. Worldwide, 1.8 billion people are estimated to be middle-class. 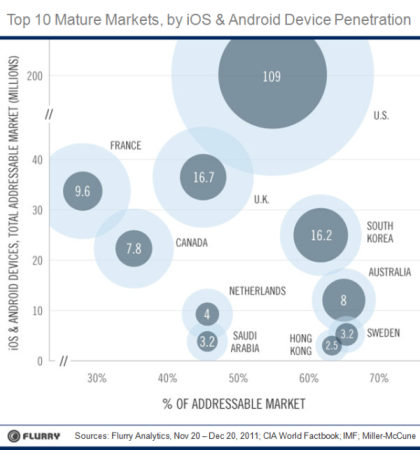 Combine those two chunks of data together and you can see which countries have the most mature smartphone and tablet markets. Flurry got a base number of potential iOS and Android users by calculating the number of adults, 15-to-64, who were considered middle-class or higher. It then looked at this group (called “total addressable audience,” or TAM), and divided it into people who already own iOS or Android smart-devices, and the marks who don’t. That tells us how mature a particular market is.

Finally, Flurry charted the world’s largest addressable markets regardless of penetration (below). It’s difficult to guess exactly how quickly each country’s smart-device adoption will occur. For example, while India is close in size to China, it has a much smaller middle- and upper-class population, and adoption among people who can afford a smart-device has been slower than in other countries. Japan, on the other hand, has a relatively well-off and tech-savvy population that has only a small amount of iOS and Android adoption, making it a potentially lucrative smart-device market in the future. 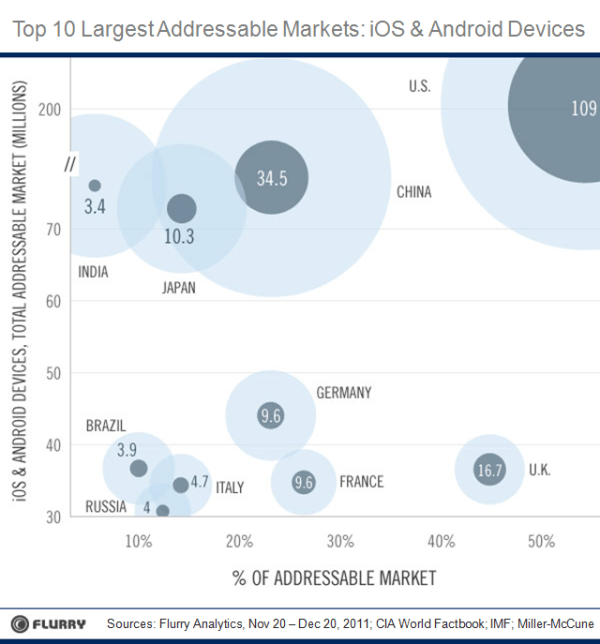