It’s been almost exactly two years since we first (and last!) caught up with 24me, a smart personal assistant iPhone app that automates your life.

Not only does 24me automatically populate to-do lists on your behalf, it also taps data directly from social networks to remind you of friends’ birthdays. In fact, it can also connect up with your utility bills, banks, and more to organize your every move.

Now, 24me is shaking off its iOS shackles and finally launching on Android, following a short beta period.

The arrival on Android has been a long time coming for the Israel-based startup, but as with many iOS-first services, it’s an obvious move as it looks to ramp up its user base.

Though it’s not quite as extensive as the iOS version at launch, 24me for Android sports many of the same features. 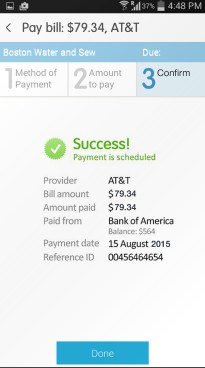 The app automatically generates reminders replete with “action” buttons, letting you pay bills, post “Happy Birthday” messages to Facebook, buy presents (there’s an in-app gift shop), and even request a handyman for all those “Paint the House” chores you keep putting off on your to-do list.

24me has already received some accolades from Apple this year, so the official Android launch should go down well.

“We had a very exciting year, being named ‘App Store best of 2014’ by Apple, and launching the Android version,” said 24me cofounder and CEO Gilad Hertanu. “We have big plans for 2015, and the Android version will soon rise up to be on a par with the iOS version.”

24me is available on Android and iOS now.