It’s been a fast-paced year for 3D printing, with more capital, more companies, and more big ideas than ever. Behind the scenes, we’ve witnessed no fewer than 50 new ventures raising money in the 3D printing sector. That doesn’t include more than 40 crowdfunding projects on Kickstarter alone.

We can expect all of this activity to result in some real landscape changes in 2015. Here are 5 trends to watch for:

Entrepreneurs are attacking 3D from all angles, with new ways to print, scan, create, and share 3D content. Most efforts to date have focused on consumer-class machines, which generally lack in precision, scale, and material choice compared to their industrial predecessors. Prices are dropping quickly, and competitors are pushing to increase performance, ease of use, and features. With many players and a lack of killer consumer applications, it’s going to be a tough landscape for startups, but customers are sure to benefit.

What’s ahead: Functional materials are making their way to market. Combined with more advanced printing processes (aided by key patent expirations), 2015 is likely to see much more capable desktop machines emerge. Many startups are also climbing the value chain, working on faster, lower-priced industrial machines. Metal printers in particular are an area of great interest to commercial customers, and I predict 2015 will see the unveiling of much more affordable options (though full commercial availability will take some time).

2. Industry incumbents back down … and start to step it up

To maintain their dominance in this rapidly growing industry, incumbents 3D Systems and Stratasys have pursued a simple strategy: either buy it up, or block it out. Witness: Stratasys merges with Objet and buys MakerBot Industries; 3D Systems sues startup Formlabs (before it ever releases a product). These tactics may be starting to backfire. Integrating acquisitions is notoriously difficult. Having purchased close to 50 companies in the last three years, perhaps it’s no surprise that 3D Systems’ employer ratings are in the dumps. The last quarter has also been quite unkind to share prices, significantly reducing the purchasing power of these two companies. (3D Systems’ suit against Formlabs was also recently dismissed from district court).

Above: Share prices drop for 3D Systems and Stratasys.

Combined with patent expirations, the announced market entry of printer giant HP, and the cumulative efforts of countless startups, the once protected turf of these industry heavyweights is starting to look a lot less defendable.

What’s ahead: Incumbents won’t wield as much power in the years ahead. Instead of slowing the industry down, they’ll need to speed up internal innovation and work to deliver better, less expensive solutions to customers in order to accelerate market adoption. Key areas for improvement: print speeds and material prices.

Get ready for your 3D headshot. Some companies have already started experimenting with in-store 3D booths on a limited scale (see Uniqlo and the MakerBot Store), allowing you to capture your bust or whole body for subsequent reincarnation as a cool miniature statuette. (President Obama, a big 3D printing fan, is a trendsetter here). 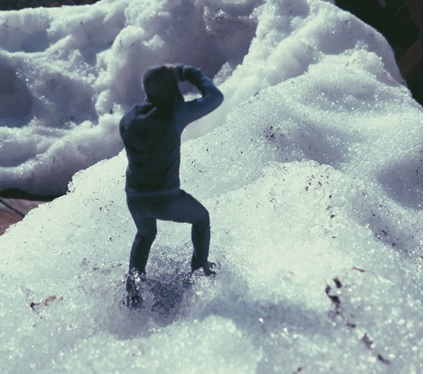 Above: My very own mini-me, on a backyard adventure. Via Shapeways.

What’s ahead: The increased availability of simple 3D scanning devices and software will make affordable, portable 3D capture setups practical. I expect 2015 to see more serious entrants on a significant scale, so don’t be surprised when you see your first 3D photo booth at a trendy wedding. And of course, if you don’t want to shell out for your own printed figurine, your complimentary digital 3D photo will always show your best angle. Most importantly though, these same scan and capture tools are laying the groundwork for mass customization, enabling companies to tailor products for each and every customer.

Anything that can happen probably will. While using the equivalent of a robotic hot glue gun to make a real gun isn’t the most effective way to procure a weapon, it certainly makes headlines. A key protagonist in Netflix’s Print The Legend documentary, gun-rights activist Cody Wilson is, unfortunately, sure to inspire copycats.

What’s ahead: More guns, grenades, and grandiose claims. And more attention from misinformed regulators who fear 3D printers as the ultimate tools of anarchy.

Some of the most promising applications for 3D printing are in health care, where higher costs are acceptable and customization really matters. It’s a little-known fact, but one of the world’s largest single users of 3D printing lies in the medical realm today: Align Technologies, maker of the Invisalign system for straighter smiles.

What’s ahead: We’ve already witnessed everything from skull and facial implants to low-cost prosthetics to replacement windpipes, but I expect the year ahead will be filled with fresh ideas. While fully functional organs are still a long way off, the ability to start tailoring solutions for individual patients is a big deal, and as practitioners gain more comfort and experience with this powerful toolset, we’ll all be better off.

Zack Schildhorn is a partner at Lux Capital, based in the firm’s New York office. He has been working with Lux since 2006, focusing on marketing, operations, and investments at the intersection of the digital and physical worlds. Zack led Lux’s investments in Shapeways, Sols Systems, and Moment and helped source the firm’s investment in Matterport. He has also worked extensively with a number of Lux portfolio companies including Transphorm, Kurion, and Siluria.