Expectations are running high as Apple prepares to announce it’s 8th-generation iPhone, alongside a wearable and services that aggregate health data and manage connected homes. (Check out our lengthy roundup of all the rumors and tidbits we’re hearing leading up to the iPhone 6 launch.)

Apple, it seems, is leading us all into the future.

And there’s good reason to believe that. With the debut of the iPhone in 2007 Apple launched the mobile revolution that we all enjoy today. 2010’s iPad saw a re-invention of the tablet, the end of the netbook, and the beginning of what’s been rightfully referred to as the Post PC Age — another massive paradigm shift lead by Apple.

But since then, Apple’s done anything but lead.

Today’s mobile tech landscape looks very different from 2007. Larger phones and smallish tablets have been in vogue for some time. Computerized watches and fitness trackers exist in a crowded market. In fact, for the last 18-24 months, every tech trend we mention here has been invented or re-invented by another Silicon Valley giant — Google.

Unless we anticipate a magnificent leapfrog in the usability of these established and growing technology sectors, Apple’s September 9 event will be seen by many as little more than an extremely well-marketed exercise in catch-up.

Above: Big-screen Android phones like HTC’s One have been around for years.

It’s widely believed that the September 9 event is primarily about the unveiling of not one but two iPhone devices — a form factor larger in size than the current range of devices (iPhone 5, 5C, and 5S). The reason is simple: Since the debut of the modern smartphone (read: iPhone), screen sizes have been growing right alongside consumer demand for larger devices.

The 4.7” and 5.5” devices we expect Apple to unveil were developed despite Apple’s traditional resistance to this trend. To be sure, Apple’s late founder Steve Jobs (1955-2011) famously stated that there was no market for such devices. “You can’t get your hand around it,” Jobs said in response to questions about a larger smartphone. “No one’s going to buy that,” he concluded.

Nevertheless within a year of his passing, iPhone devices saw saw a modest increase in size to 4” from their predecessors’ previous 3.5” size in order to compete with the likes of the popular upcoming Nexus and HTC devices.

The larger iPhone 6 is a clear example of Apple following the path that Google’s Android devices blazed, rather than leading it.

Where small tablets (7-9” diagonal) are concerned, Apple’s early miss-steps were impressive. The company’s dismissal of  pervasive evidence that more users would have more interest in a more versatile tablet was surprising. Apple’s leadership lampooned the tablet-using public when stating that users would have to “sand down their fingers” in order to make use of devices like the Nexus 7.

The now infamous Steve Jobs reality distortion field also cropped up with his statements around how people actually use tablets: “All tablet users will already have a smartphone in their pockets, giving up precious display area to fit a tablet in our pockets is clearly the wrong tradeoff.”

With the launch of Amazon’s Kindle Fire and Google’s Nexus 7 tablets in 2012, it became clear that market forces were going to require Apple to produce just such a device it had any interest in staying relevant in the tablet space it created. (Samsung also deserves credit for showing the potential of smaller tablets with its Galaxy Tab line, which launched in 2010.) It’s unclear whether demand fueled rumors or rumors fueled demand, but the launch of the iPad Mini was incredibly successful.

The iPad Mini now reportedly outsells the larger iPad. To this day, 4 of the top 5 best selling tablets on Amazon are in the 7 to 8 inch range.

There’s something to Apple’s strategy here: Despite the 15 million small tablets sold by Apple’s competitors in 2012, the demand showed Apple that, regardless of its early misgivings, there lay an opportunity. Missing out on those 15 million tablet sales could be looked at by some optimists as an investment that allowed Apple to gauge a market they were uncertain about before moving into it. 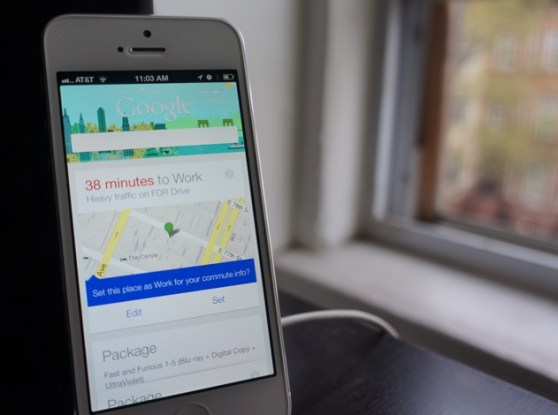 Above: Google Now on the iPhone

Voice recognition is one of the most compelling technologies emerging today. The promise of the functionality has a magical quality — one that turns your device into a digital friend rather than a digital pocket tool. This would probably explain why users are delighted when voice works and frustrated when it doesn’t.

Voice is an outlier for another reason. Apple’s Siri came first, but many would contend that it was half-baked. Siri was designed as a digital assistant from the start, rising to a higher calling than Google’s June 2011 roll out of Voice Search. The problem here is that Siri continues to fall flat in the face of Google’s voice technology when it comes to accuracy. While both systems will list results, only Google Now will sort those results or give you a retail store’s opening and closing hours. 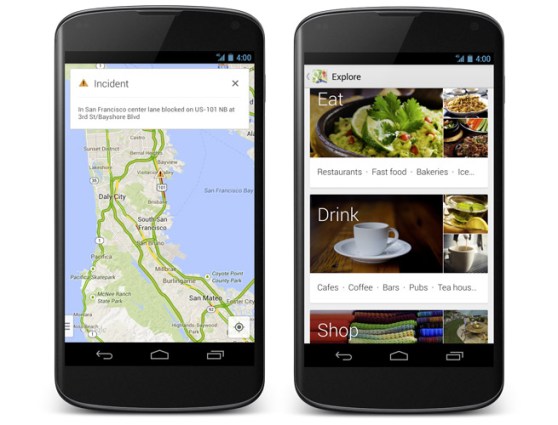 Above: The new Google Maps app on Android

There’s not much to say here. Google’s turn-by-turn directions gave Android users the ability to navigate with ease for nearly half a decade. Indeed, when Apple was using Google’s map data most iOS users content, despite the lack of turn-by-turn navigation. And while Apple’s invested heavily in its 2012 home grown map solution, Apple Maps continues to struggle in terms of accuracy when compared to Google’s map offering.

To be fair, Apple’s certainly gained map market share against Google’s map solution for iOS devices. But it seems more likely that the adoption is a side effect of the Maps app being the default navigation tool that launches from Mail, Messages, Siri, and other iOS functions.

What is clear is that Apple’s navigation solution was a reaction to a change in Apple’s strategic relationship with Google, rather than an attempt to lead in the space. The Cupertino tech giant was so unprepared for the Maps rollout that it later issued a public apology and encouraged users to download and make use of more reliable apps on the app store.

Another example of Google stepping up and donning the mantles of leadership is wearables.  First-mover Pebble (along with a mob of crowdfunding zealots), produced a ground-breaking, viable, computerized watch.

Google took the smartwatch model and created an Android-based platform around it — one that’s growing quickly with a diverse range options and software. These devices, though still in their infancy, have grown smarter over time.

An upcoming Android Wear update will let users leave clunky phones at home while on a jog or a bike ride, in an attempt to penetrate the market that Fitbit now controls with about 40% of fitness gadget share.

Still, Apple’s wearable prospects seem bright. Exciting rumors are delivering hopes of groundbreaking design, mated with features never-before-seen in a wearable device like wireless charging and miniaturized electronics that allow for as many as ten sensors.

Speculation on wearable devices aside, Apple didn’t lead these new tech paradigms. In addition to the large phones, the small tablets and the other trends mentioned above, it’s important to note that it hasn’t led in cloud services. Apple’s music offerings have been fragmented and stale. While it looks like they may take a stab at payments, aside from pairing a fingerprint sensor to it, the technology and functionality is again something we’ve seen before.

All of the above are cases where Apple’s software and interface prowess could have been leveraged to great effect in solving some real consumer pain points, yet over the last few years there’s been nothing out of Cupertino on these matters.

Apple needs to prove it can leapfrog Google on September 9. Otherwise it may not be able to catch up.