The biggest mobile developer study in history with 6,000 respondents from 115 countries says that while iOS developers make an average of $5,200 per month in app revenue and Android developers pull in $4,700, more developers plan to start developing for Windows Phone than any other platform.

Besides Windows 8, that is. 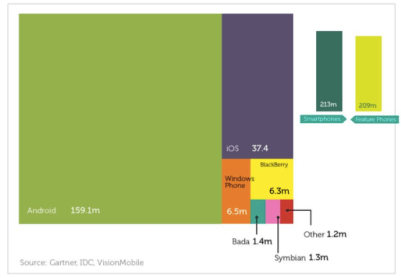 Above: Smartphone sales Q1 2013 by platform

Even so, the fact that 35 percent are planning to develop for Windows Phone in the third quarter of 2013 — more than the 26 percent thinking of iOS — is likely to have a significant impact on the number of Windows Phone apps.

VisionMobile commissioned the developer economics study, which will be available for free download, to track mobile ecosystems, developer mindshare, and monetization trends.

The average developer, the report shows, builds for 2.9 ecosystems simultaneously — most likely a mix of Android, iOS, and Windows Phone — with either Android, iOS, or HTML5 as their primary platform 84 percent of the time. That’s down from 2011, in which developers built for 3.2 ecosystems, and shows that BlackBerry has likely fallen out of favor. 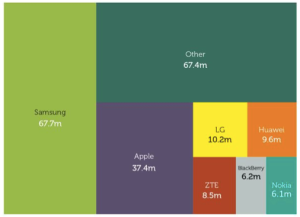 Even though Windows Phone has a significant amount of developer interest, the number is actually down from the previous quarter. And it’s still going to be extremely challenging for Microsoft to break into one of the top two leadership positions in the smartphone market, VisionMobile says in the report.

The Android-iOS duopoly is still holding strong with no sign that it can be challenged in the foreseeable future. Once network effects have kicked in and scale has been achieved, it is almost impossible for contenders to compete directly and displace the leaders. Beyond network effects, the incumbents have established developer habits, user stored value into the apps themselves, external subsidies in the form of developer time & effort, and abundant telco support.

That said, Windows Phone has jumped to third in the mobile ecosystem battle and is showing faster growth on a percentage basis than either Android or iPhone, as the latest Kantar Worldpanel data from June also shows.

With Microsoft’s marketing muscle and financial resources, and its smart linking of Windows Phone’s with Windows 8, there’s still a significant chance that it could jump to second place.