It’s not pay-for-download. Not advertising. Not freemium. And not in-app purchases. Instead, for the rank-and-file of the hundreds of thousands and perhaps millions of mobile developers around the world, e-commerce is now the most lucrative mobile monetization strategy.

Clearly, someone forgot to tell Clash of Clans.

That’s just one of the insights from what might be the largest-ever mobile developer survey, conducted by VisionMobile. Over 7,000 developers in 127 countries participated, including developers from Asia, Africa, Europe, and North America. And it might be a little hard to believe, given that massive freemium games with virtual goodies and powerups like Clash of Clans are pulling in just shy of a million dollars a day via in-app purchases. 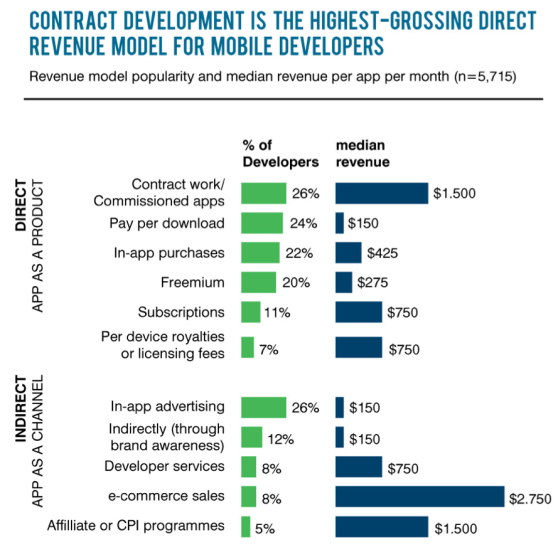 That’s a lot of gems.

But the survey was not about market leaders and app outliers. Rather, for the vast majority of app developers who do not have massive viral hits, e-commerce is a surprising winner, even though only eight percent of app developers currently use it.

“The median revenues of organizations involved in e-commerce are $2,750 per app/month, by far the highest among all app revenue models that we track,” VisionMobile says in the survey. 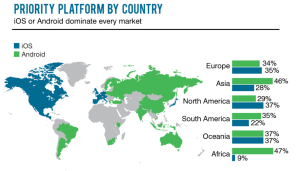 “In-app advertising remains one of most popular revenue models at 26% of app developers, particularly strong on platforms where demand for direct purchases is weak, such as Windows Phone and Android,” VisionMobile says.

Popular, I suppose, but hardly lucrative.

A key driver of the shift? According to VisionMobile, it’s Amazon. Amazon introduced its Mobile Associates API recently, which allows developers to feature Amazon products — and earn up to six percent of their purchase price when users buy them. The amount of money developers can make here is vastly higher, per user, than traditional advertising … which is why in just two quarters the number of developers using this strategy jumped from five percent to eight percent.

In other news from the survey, more developers target Android than any other platform, which is not a shock. But most developers still build first for Apple’s IOS platform, in spite of that fact that Android has something like 80 percent global market share. While 71 percent of developers build for Android, 59 percent of developer prioritize iOS — which is precisely why the best apps generally come to Apple’s platform first.

Driving that priority is that, just like the rest of us, mobile developers like to take home a paycheck. 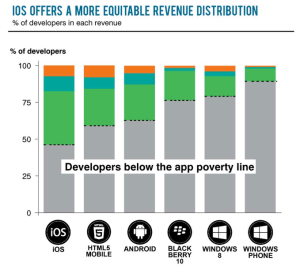 That puts 60 percent of developers below the “app poverty line,” according to VisionMobile.

One impressive note about Android, however: if you want an absolute top-tier income, Android has the highest percentage of developers with greater than $50,000 in income, per app, per month.

The entire report is available, for free, at Developer Economics.