Yesterday, the focus was largely on Apple as it officially became the world’s only trillion-dollar public company, but history was also being made at a much less conspicuous site: Motorola’s offices in Chicago, Illinois. Late in the afternoon, Motorola publicly announced the first actual mobile 5G device, setting the stage for what’s about to be a revolutionary decade for telecommunications.

I don’t use those words lightly, and I use them fully understanding that the specific device Motorola showed — the “5G Moto Mod” — will, unlike Apple’s first iPhone, likely be as forgotten by history as HTC’s pioneering ThunderBolt and Evo 4G phones. But Motorola’s announcement was important for a number of reasons that every future smartphone buyer should understand, so it’s worth walking through the details now that all of the dust has settled.

1. Verizon, Motorola, and Qualcomm just kicked off the 5G generation

Until yesterday, the next generation of wireless technology was largely theoretical, as far as consumers were concerned. Yes, many companies have been doing behind-the-scenes legwork to engineer, test, and build early 5G hardware, and yes, some of them have announced 5G modems that will be locked (“fixed”) in homes. But Motorola just showed a complete mobile 5G device. Everyone’s been waiting to see a 5G phone — not a computer or a tablet — that could be put in a pocket and carried anywhere. After a longer wait and much harder engineering work than most people realize, that just happened.

And with that major milestone out of the way, the 5G generation is really set to begin. While Verizon and Motorola merit plaudits for working to move the consumer launch date forward, chip and network hardware makers — including Qualcomm, Samsung, Ericsson, Intel, and Nokia — deserve tremendous credit for the engineering and testing work that made 5G possible at all.

2. 5G is (seriously) expected to change everything

The phrase “this changes everything” has been widely overused in marketing in the past decade, so the words no longer carry their former gravitas. But everyone who understands 5G — wireless carriers, cable companies, officials from governments all over the world, and device makers — firmly believes that this new wireless technology is going to change the world. I’ve written articles explaining why, but in summary:

3. The first mobile 5G device is a big backpack for 4G phones

On the one hand, the 5G Moto Mod could be considered a kludge. It’s puffier than a Mophie Juice Pack smartphone battery and has an antenna sticking out of the top. Who’s actually going to want to carry one of those around?

If you know anything about Mophie batteries, the correct answer is “plenty of people.” Counterintuitive though it may seem, there’s great merit in the idea of buying an affordable 4G phone (Motorola’s new Moto Z3) this month and then adding 5G capabilities when Verizon’s 5G network is available in your area. You get the established benefits of a conventional LTE device right away, plus whatever speed, latency, and security benefits Verizon’s 5G offers next year — without either paying for another new phone or needing to carry around the 5G backpack all the time. 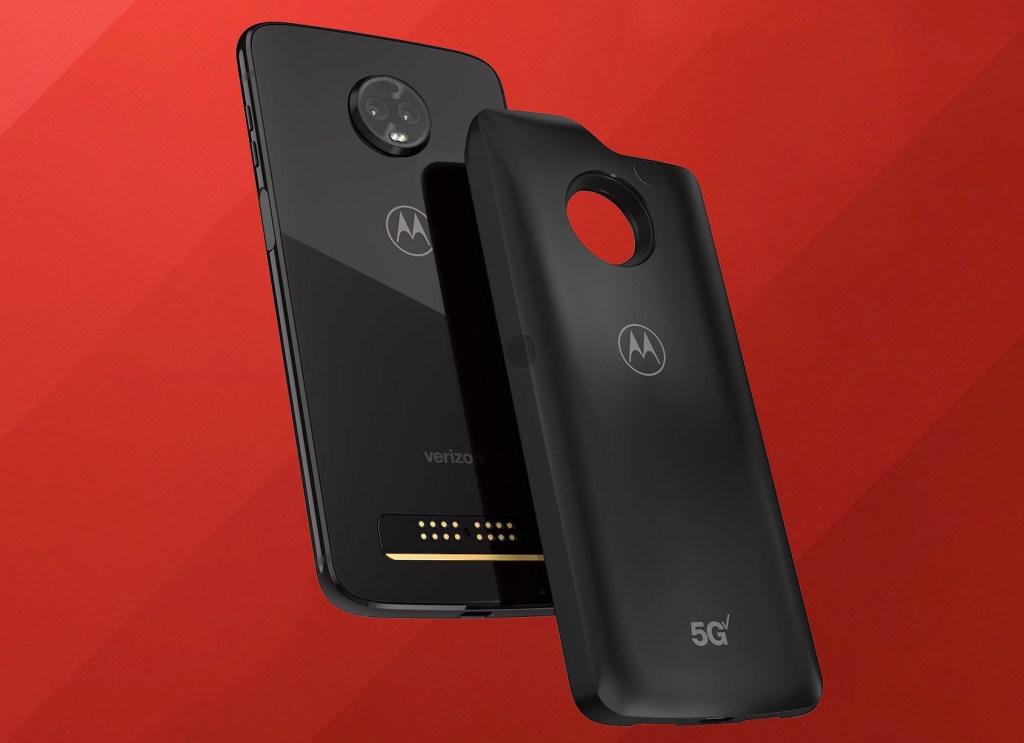 One non-trivial area of concern is the 5G Moto Mod’s size — it’s a big attachment that more than doubles the Moto Z3’s physical volume, and two years from now it’s going to look ridiculous compared with integrated 5G phones. Since it only supports 5G millimeter wave connectivity, one of several different ways 5G radio signals will be broadcast, it’s probably also going to be relatively energy-inefficient and limited in its connectivity to many of the non-millimeter wave 5G towers going up around the world in 2020. But the same was true of early 4G devices, and that’s the reality of being an early adopter.

4. It isn’t relying solely on a 5G modem

One important detail that virtually no one noticed during the 5G Moto Mod’s introduction is that it actually contains two separate Qualcomm modems: the 5G-capable Snapdragon X50 and the cutting-edge 4G Snapdragon X24. When you pop the 5G Moto Mod onto any of the Moto Z-series phones, it will replace whatever older 4G modem is inside with the fastest LTE Advanced Pro modem around. There are also apparently four separate antennas inside the 5G Moto Mod to guarantee an excellent high-speed connection.

I’m guessing that these little-known details are going to push the 5G Moto Mod’s price up to a stupidly high level — $300, perhaps more. At the wrong price, the accessory may well be even more quickly forgotten than HTC’s earliest 4G smartphones.

Motorola and Verizon decided to announce a mobile 5G product at the beginning of August. This was a major surprise because Verizon is planning to spend the rest of 2018 marketing fixed 5G home modems and isn’t planning to offer mobile 5G service until 2019. 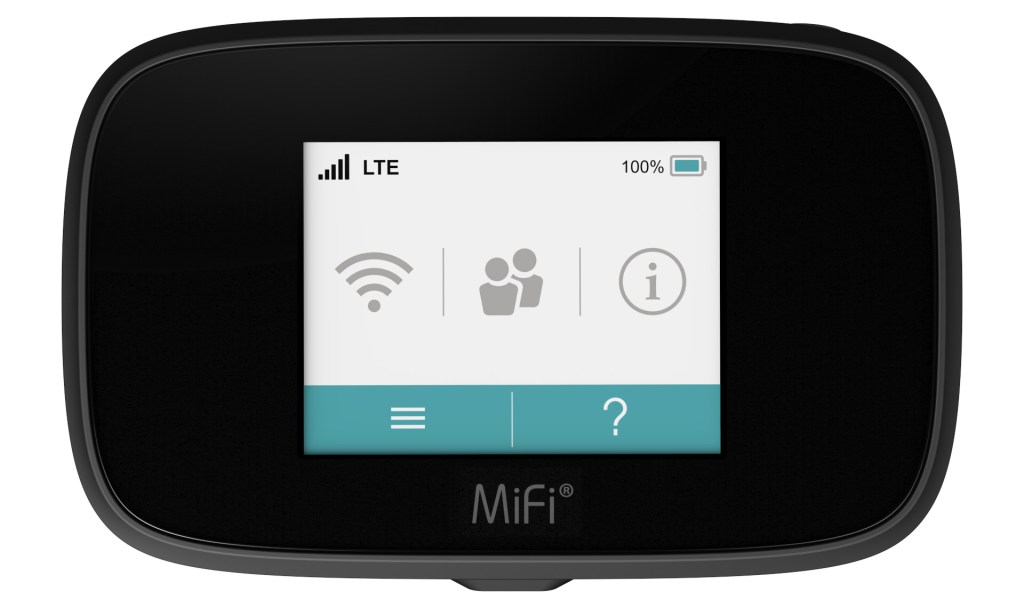 By comparison, rival AT&T committed to a mobile 5G launch across a dozen cities this year, but it hasn’t announced an actual product yet to enable that service. As of yesterday, Verizon just turned up the heat on AT&T so much that a hardware announcement of some sort is necessary. Unlike the 5G Moto Mod, which Verizon is now promising to sell in “early 2019,” whatever product AT&T announces will need to actually be available this year.

You can be sure it will be a mobile 5G hotspot similar to ones released by Novatel Wireless/Inseego in the past as MiFi units. And pay a lot of attention to whatever prices AT&T announces for both the device and 5G service. If it punts on one or both of those details, or makes the wrong call by pricing them too high, 4G might wind up sticking around for longer than expected.

6. Expect a lot of 5G phone announcements and debuts

Motorola may have been the first to detail its actual 5G-ready smartphone, but literally dozens of companies are itching to make similar announcements. Qualcomm alone is working with no fewer than 19 (and likely more) companies on 5G devices with X50 modems, and now that one has been officially revealed, there are going to be lots more.

Many will be on view at the 2019 CES in January. But just like Motorola didn’t wait to show off its option at CES, other big companies are going to hustle to stand out from the crowd with early announcements — assuming their products are ready enough to show.

7. You need to start caring about your phone’s modem and data capabilities

Although I flagged this point in an earlier article, it’s worth repeating now: For the last decade, you probably haven’t cared much about your phone’s modem or data capabilities, but that needs to change. We are on the cusp of a major, generational switch in devices, and even if Apple currently markets its devices’ data speeds as a tiny bullet point* that customers hardly notice, it’s about to become more important. (* Note: Apple isn’t even listing data speeds for the iPhone 8, 8 Plus, or X on its Tech Specs pages any more.)

Think back to the original iPhone, which shipped with only 2G/EDGE data capabilities at a time when the rest of the industry was transitioning to 3G. Apple famously overpriced that first iPhone and undershot its limited early sales expectations. The company quickly had to slash prices and (grudgingly) apologize to early adopters. As a result, the iPhone 3G was considered such a critical next step for Apple that the 3G feature — which debuted with a completely different housing and lower price point — was openly discussed by the company before the new device even launched. 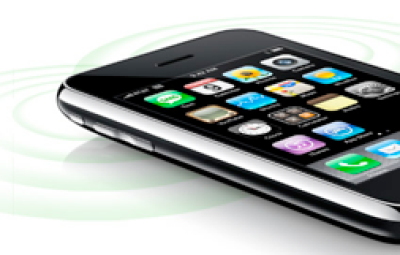 Above: Remember the iPhone 3G?

As Apple continues to fight with key 5G chipmaker Qualcomm, the same thing could easily happen again with next year’s iPhone. Dropping $1,000 on a phone with last-generation 4G chips isn’t going to seem like a smart investment when 5G becomes available where you live. And I’m willing to bet that Apple’s not going to refund iPhone customers this time. Android users won’t be getting refunds, either, but there will be no shortage of Android 5G choices in the very near future.

8. You need to start thinking about your whole home’s data needs, not just your phone’s data plan

When your phone is capable of 1 to 5 Gigabit per second data speeds, there’s a pretty good chance it will be as fast or faster than your existing home broadband package. In the United States, many four-person families currently share home broadband that’s at or less than 50 Megabytes per second. That’s equal to 400 Megabits or 0.4 Gigabits per second, which is to say that you could bring your phone home and use it as a complete replacement for your existing broadband modem.

There are a few reasons this might not turn out to be practical, but both cable and cellular companies are already planning for a future where it could happen. So are device manufacturers. With Verizon’s approval, the 5G Moto Mod’s web page talks about equipping your phone with a personal hotspot that’s capable of providing plenty of “bandwidth to share.” 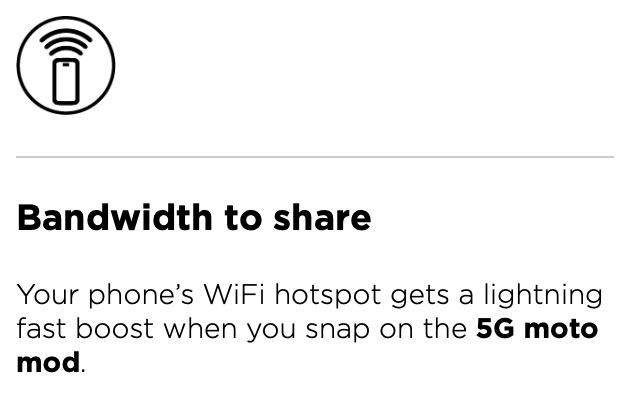 Imagine having a single unlimited data plan that covers not only your phone but all of your home video streaming and downloading, as well — at equivalent or better speeds than you get at home today. Then imagine what you might be willing to pay for it.

These are just some of the reasons yesterday’s announcement of the first 5G mobile device matters. A dramatically faster and more ubiquitous wireless future isn’t just theoretical any more — it’s really coming, so get ready for the next exciting ride to begin.