VANCOUVER — The first computer, ENIAC, cost $6M in 1946 and had less power than a $5 animated greeting card you buy today and throw away tomorrow. That kind of technology innovation is powering the coming internet of things, and turning it into what Cisco Canada CTO Jim Seifert says will be a key component in $14.4 trillion of economic activity within the next decade.

Accelerating change is the key. 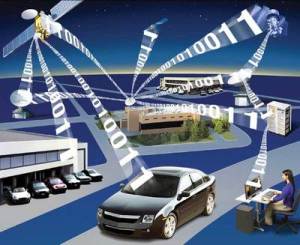 “In 50 years, 90 percent of what we know will have been discovered in the last 50 years,” Seifert said today at the Wavefront Wireless Summit in Vancouver. “And by 2050, $1,000 worth of computing will have the power of all the human brains on the planet.”

Change in nine key areas is driving the internet of things, according to Cisco. Those nine areas are:

All together, those nine changes are bringing about the fourth phase of the internet, in Cisco’s view.

The first phase was simply getting people connected … and the second phase was creating a networked economy by bringing businesses and transactions online. The third phase, evident in telepresence and gaming, was “immersive experience,” according to Seifert.

The fourth is the internet of things. 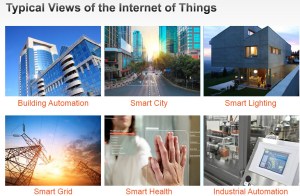 Above: Freescale Internet of Things

Of course, we’ve been hearing about the internet of things for years — including billion-node global networks. But for most of us, our cars still don’t talk to our phones, and our homes don’t brighten and warm in anticipation of our imminent arrival, and our lawns don’t automatically water themselves. Our cities aren’t very smart yet: the police departments in most locations don’t automatically know when crowds form, and the transportation systems don’t quickly react to changing transit and commuter needs.

But science fiction author William Gibson’s comment that “the future is already here — it’s just not very evenly distributed,” has never been more true. And that’s the case, apparently, for the internet of things as well.

Examples of the internet of things already in existence include projects that are very much functioning, but simply not widespread yet … such as the usage-based insurance via car-embedded sensors that State Farm is testing, and smart cars such as the Nissan Leaf that tells you how much energy you use, and when to plug in to make your recharges cheaper. Electrical utilities, such as BC Hydro in Canada, are using smart metering to improve grid efficiency and making billing more accurate, and airports such as Copenhagen International are using data from free WiFi services to track passengers’ entrances, exits, stops, and backlogs, all in order to improve flow and experience.

Other examples include remote healthcare, which is more than just voice and video.

“It lets me listen to a person’s heartbeat 1,000 miles away,” a doctor participating in a Cisco trial, which adds instrumentation to remote health services, said.

Even cows are being tracked with UHF RFID, which allows farmers and ranchers to track and locate cattle without having to round them up, and also enables better health care for the animals. And the promise of smart cities, with street lighting that activates when needed and turns off when not in use, has the potential to save significant dollars. Most cities, Seifert said, spend 40 percent of their energy budget on lighting.

All together, there’s already hundreds of billions of dollars in economic activity that is affected by the first fruits of the internet of things. But not all is pink and rosy.

“There are some problems,” Seifert admitted. “I don’t know if you heard about the internet-connected fridge that sent out over 750,000 spam emails … apparently it caught a PC virus.”