App users are hard to get and harder to keep. Even worse, 90 percent of the ones you do keep don’t become high-value users, either by buying something in your freemium game or watching an ad in your productivity app.

So how’s a hard-working mobile developer going to get paid?

Mobile marketing automation system Kahuna says the answer is an engagement marketing strategy and a systematic retention plan that starts the moment a user installs your app. With those two factors in play, publishers can boost 90-day retention by 180 percent.

That includes, Kahuna CEO Adam Marchick says, the use of an “anti-funnel.”

“It also requires a marketer to have clear insight into their anti-funnel. Yes, ANTI-funnel,” Marchick told me via email. “Many marketing platforms support users that move in a logical way through the customer journey/sales funnel. In today’s cross-channel world, that journey doesn’t work for most.  We’ve found that it’s more important to identify signs of churn and develop campaigns to keep those users in the fold, rather than messaging your best customers who are already doing those key actions that you want them to.”

A critical part of that retention plan is asking for the privilege of sending users push notifications, which help you onboard, engage, and re-engage mobile users. Every developer knows this, of course, but not every developer has the right strategy for getting permission — or for not abusing the privilege once granted.

The key, particularly on iOS, is not to ask with the device’s built-in system request. Get shot down there, and you’re likely toast forever. Instead, pre-ask with an in-app interstitial — ideally after having proven some initial value — and only trigger the iOS prompt when users indicate that they’d be interested. 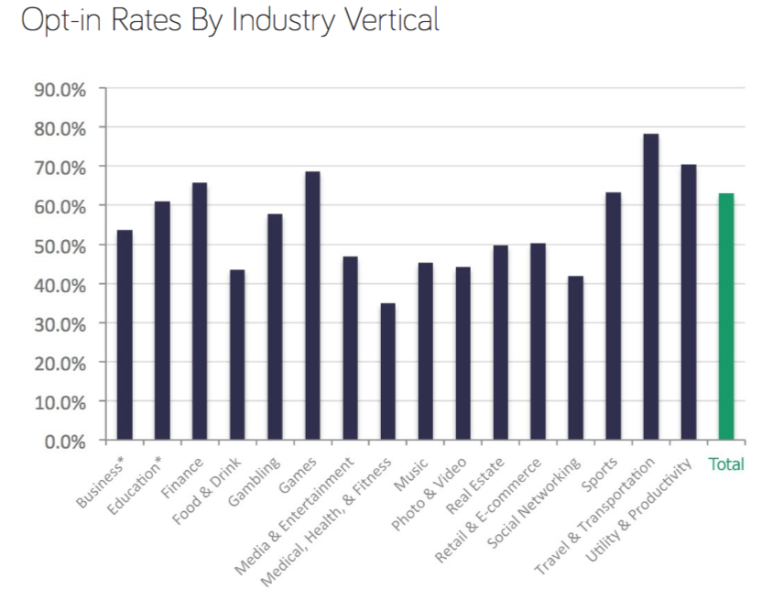 Above: Push notification opt-in rates, according to Kahuna

Start sending annoying or too-frequent messages, however, and users are likely to engage the nuclear option:

“Kahuna has found that consumers are much more likely to uninstall an app than they are to navigate to a settings page to toggle off notifications,” the company said. “Once a user opts in, it’s very important that companies follow best practices around personalization, contextualization, and cadence to ensure the user continues to find value in the push messages sent.”

There’s a massive and persistent gulf between push messaging opt-in rates on iOS and Android: 46 percent on iOS versus 78 percent on Android. 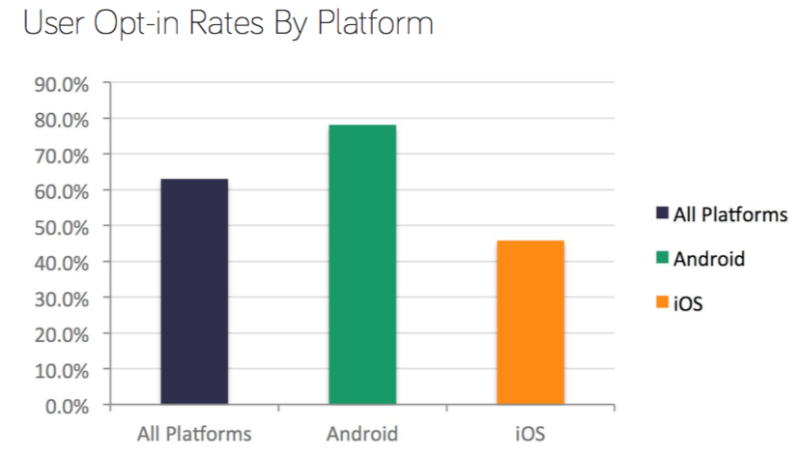 Above: Android vs iOS: push notification opt-in rates, according to Kahuna

That’s largely due to the fact that Android automatically opts users into message, although Kahuna recommends getting explicit opt-in even on Google’s mobile operating system. A recent study released by competitor Urban Airship found similar differences, or even a wider gap.

Retaining users is a major challenge, of course. But the bigger and more essential challenge is engaging them, since engaged users are those who can turn into valuable users who either buy in-app products or watch enough advertising to monetize — even if they don’t become one of the 0.15 percent of users who are whales and account for 50 percent of in-game revenue.

“The average consumer has about 33 apps on their phone, but only uses around 12 each day,” the company said.

As we’ve seen in our mobile advertising and brands report, half of those are owned by Facebook and Google, leaving just a few slots for other app publishers to squabble over. And particularly if your app isn’t a game people are playing multiple times a day, a mapping app they refer to regularly, or a social networking app they repeatedly check, messaging can help bring your app back to mind.

“Kahuna data shows that retail, finance, and travel apps were able to more than double their 30-, 60-, and 90-day retention using push,” the company said. 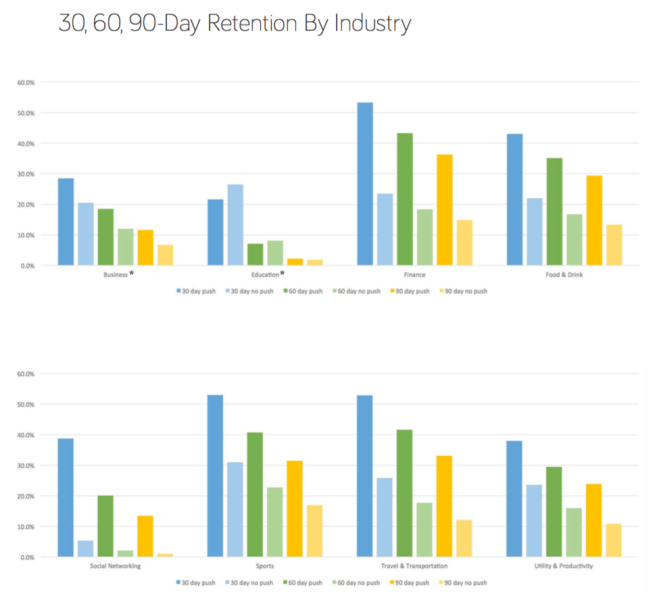 Above: Mobile app retention by industry, according to Kahuna

Interestingly, in the Urban Airship study, gaming was one of the lowest opt-in categories for push messaging, while in Kahuna’s it was one of the highest. Clearly, there’s still a great deal of variance from app to app as well as category to category, and also clearly, how you do push — in addition to how you execute an overall retention plan — is probably more important than whether or not you do it.

The Kahuna CEO’s advice here is relevant for all apps, not just games:

“We don’t encourage a daily blast of ‘buy more gems now,'” Marchick said. “Instead we encourage the companies we’re working with to use behavioral cues and engagement state to send messages that delight, not annoy. This keeps users opted in for the long haul.”

Of course, one thing to keep in mind is that no amount of optimization or strategy will engage or re-engage users in an app or game that sucks. The first task for mobile developers and publishers is the difficult challenge of creating something worth using or playing, and also worth coming back to regularly.

The Kahuna study was based on a review of 39 million mobile users.