Thousand of developers are making millions of apps to reach billions of consumers. Unfortunately, that critical last step of mobile app development, user acquisition, is getting harder, not easier. 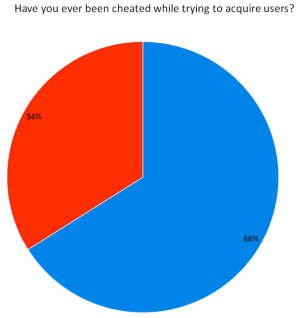 Above: A full third of developers get cheated when trying to acquire users

And it gets even more unfortunate, as most developers are doing it wrong.

In a 230-developer study that covers over 9,000 apps and almost 400 million monthly active users, VentureBeat has learned that developers’ least-favorite user-acquisition method is often the most financially successful. In addition, the most-favored is also the least likely to bring in the best high-quality users.

And while Facebook and Google are the undisputed king and queen of user acquisition, five other companies tower above the dozens of other user-acquisition competitors.

The app marketer’s challenge is clear: With 98 percent of revenue coming from freemium apps, finding the right users is critical to whether an app lives or dies. Entice users who pay for premium upgrades or in-app purchases and you’ll live.

Making the whole game more complex is untrustworthy user acquisition companies — a full third of developers in our study report getting cheated when working with one of these firms.

According to the app and game makers we surveyed, cost-per-install is the mobile developer’s runaway favorite advertising mode for user acquisition. 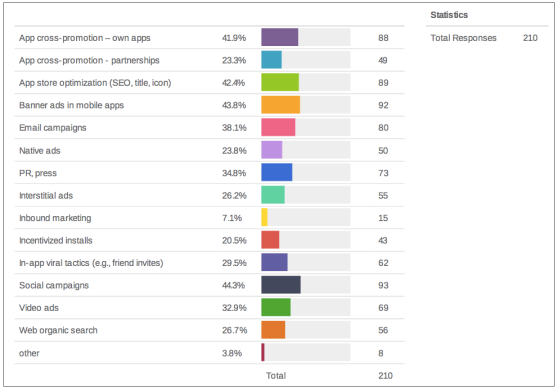 In fact, 52 percent of developers choose CPI first, more than double the number of the next-leading method. That’s probably due to its sheer simplicity: If the cost-per-acquisition is lower than your user lifetime value, you pull the trigger. For the same reason, it’s also very safe … you know exactly what your costs are going to be, and if they fit within your app’s economics, nothing can go wrong.

Above: 70% of developers use social media to acquire users

Three other user-aquisition methodologies, regardless of user acquisition company or partner, generate better users at a lower price, including cost-per-lead (CPL), which generates just as many high-value “whales” who spend more than $75/year in your app despite being used by 10 times less frequently.

In the crowded user acquisition marketplace, however, where we counted easily 75 competitors, five companies stood head-and-shoulders above the rest. In fact, NativeX, Fiksu, Chartboost, Flurry, and the recently acquired AdColony all tower above their competition, with cumulative response numbers comparable to YouTube and Twitter.

The complete study is available at VB Insight.