Mobile ad fraud rates nearly doubled in 2018 compared to a year earlier, according to a new report from mobile measurement company Adjust. Ecommerce is the category of mobile advertising that is most affected, followed by mobile games.

Berlin-based Adjust said it’s no surprise that mobile ad fraud is on the rise. About 7.3 percent of all paid installs — the user downloads that are triggered by paid advertising — were rejected as fake by Adjust’s fraud prevention tools.

Adjust measured 3.43 billion app installs and more than 350 billion events, processing and analyzing 125 terabytes of data per day from 20,000-plus apps in the first quarter of 2018. The company’s goal was to shine a light on how much fraud is currently present in the global mobile ecosystem and to track its effect on the industry in 2018.

Adjust said that SDK spoofing accounts for 37 percent of the fraud. Twenty-seven percent was due to click injection, 20 percent was faked installs, and 16 percent was from click spam.

According to eMarketer, mobile ad spending in 2018 will grow 20 percent to more than $75 billion in the U.S. The research firm also estimates that mobile advertising will rise by 23.5 percent year over year in 2018.

Damage from mobile ad fraud in 2018 could be in the billions . With a 7 percent paid install rejection rate, the damage can be pegged at approximately $4.9 billion.

“Naturally, the fraud rates we see in active rejections only show the level of fraud prevented for advertisers who actually chose to protect themselves ,” said Andreas Nauman, Adjust’s fraud specialist, in a statement. “Yet the aggregate amount of preventable fraud is significantly higher. The number of unreported cases of advertisers being victims of mobile ad fraud is undoubtedly a much high number.” 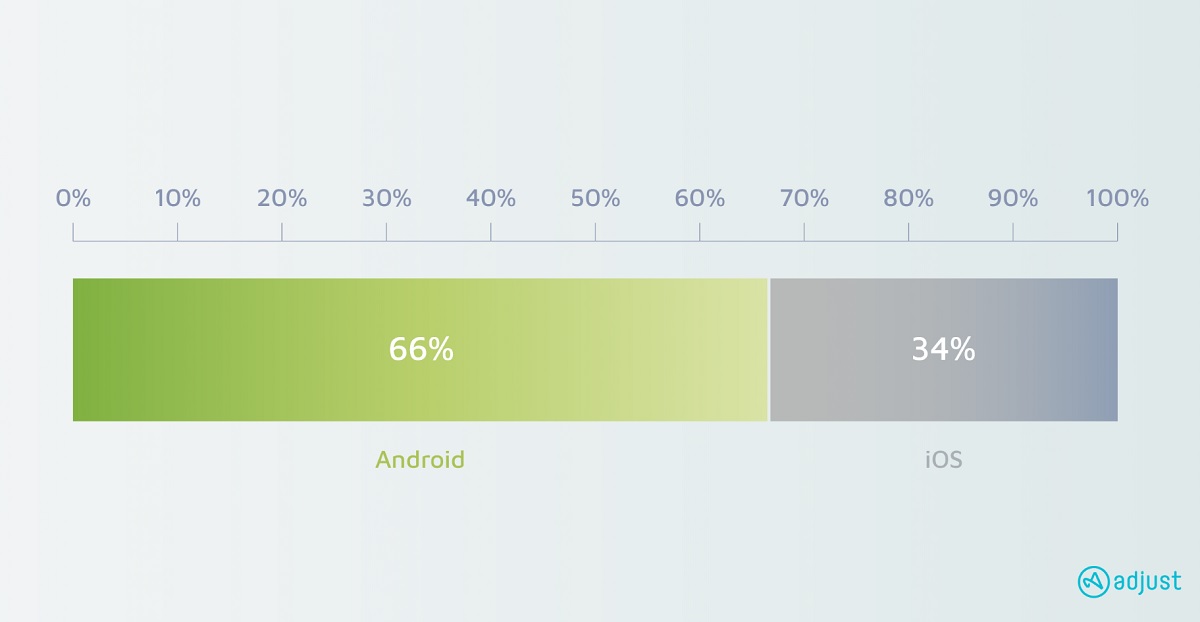 Above: Android fraud is bigger than iOS fraud.

Last year, the games category was hardest hit, experiencing 35 percent fraud rates. The next category that fraudsters attacked was ecommerce, which experienced 20 percent fraud rates. In 2018, however, there has been a dramatic shift. Ecommerce is now the most affected vertical, accounting for two-fifths of the total installs rejected by Adjust. The other top mobile app categories most affected after ecommerce are games (with 30 percent), followed by travel apps (with 10 percent).

The new scam du jour is SDK spoofing, or faking an install of an app on a real device. Adjust said this form of fraud is the most difficult to detect of all fraud schemes, and it has rapidly gained momentum and become fraudsters’ preferred scam du jour.

Adjust’s initial investigation found that SDK Spoofing is globally distributed across all markets and is attributable to 37 percent of all rejected installs.

Single campaigns experienced up to 80 percent of all installs attributable to SDK Spoofing. This means that some advertisers could be losing 80 percent of their ad budgets. For some individual advertisers, the loss could easily be in the tens of millions.

Adjust’s Fraud Prevention Suite rejected twice as many app installs on Android versus iOS devices, based on Click Injection, where clicks are triggered before an app is fully installed. This fraud type only occurs on Android devices, yet is attributable to 33 percent of all rejected installs.

“When Adjust spearheaded our industry-wide initiative last year, the Coalition Against Ad Fraud (CAAF), it was a first step to bring together key players in the mobile ecosystem to collectively fight fraud,” said Christian Henschel, CEO of Adjust, in a statement. “Yet the ongoing status quo of ignoring widespread mobile ad fraud by some remains the weakest link and biggest challenge for our industry in 2018. Aligned on one goal, Adjust’s next step is to help educate the market about all the different fraud types used, so all players can undertake a stronger defense and implement effective countermeasures to fight fraud head-on.”