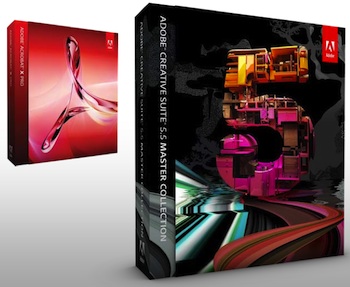 Adobe just revealed the details of Creative Suite 5.5, the software package that includes many of its flagship design and development products, including Photoshop, InDesign, and Flash Builder. Although the number suggests a humdrum release, CS5.5 actually includes some significant changes to how Adobe plans to release and make money from its products.

For one thing, as an alternative to the traditionally-priced version of Creative Suite, Adobe customers can now purchase CS5.5 through a subscription model. Those subscriptions aren’t exactly cheap (Photoshop costs $35 per month, while the full suite costs $129 per month), and this isn’t a full-on embrace of the online software model either. Subscription customers still buy the software in a box — they just pay for the license one month at a time.

Still, $35 a month is a much lower hurdle than the normal price, which ranges from $1,299 to $2,599 depending on the package. Dave Burkett, vice president and general manager of Adobe Creative Suite, noted that the subscription options give customers greater flexibility, as well as an affordable way to try the products before paying the full cost.

“A lot of our customers are freelancers coming on and off of a project,” Burkett said. “A month-to-month plan is a way to have flexibility to start and stop their licensing with Adobe.”

Burkett also said that CS5.5 is Adobe’s first product under a new release cycle. Traditionally, the company has released new versions of its products every 18 months. Now, the major releases (presumably the ones that are numbered 6, 7, 8, and so forth) will come out every two years, but Adobe will also launch new versions halfway between each major release. That better matches the rhythm of casual customers who only want to buy new software every two years, Burkett said, while also allowing Adobe to get new features onto the market every 12 months.

Beyond the business model, what’s new? Well, there’s a growing emphasis on mobile design and development, which may assuage some of the company’s critics who suggest that it’s becoming less relevant as smartphones become more central. Apple has famously declined to support Adobe’s Flash format on its iPhone and iPad devices, and there’s a growing sense that HTML5 is the standard of the future. Adobe said that more than 131 million smartphones will have Flash Player installed by the end of the year, but it’s also building tools for HTML5 development — CS5.5 includes new features for both Flash and HTML5 content.

In addition to helping designers and developers create content for smartphones and tablets, Adobe is also releasing tools that help them work on the devices themselves. The company has already released its own mobile apps, such as Photoshop Express, and now it’s opening the doors to allow outside developers to go even further. Specifically, it’s releasing the Adobe Photoshop Touch Software Development Kit, which allows developers to create apps for Android, Blackberry PlayBook, and Apple’s iOS devices that interact with Photoshop. It’s also releasing three sample apps built with the SDK — Adobe Color Lava for Photoshop, Adobe Eazel for Photoshop, and Adobe Nav for Photoshop.

Adobe said Creative Suite 5.5 should start shipping in the next 30 days.