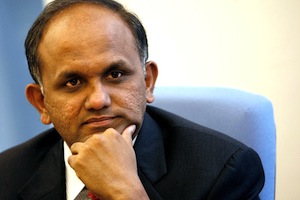 Judging from the press coverage of Adobe, you’d think that the big issue for the company is the fate of its Flash technology. However, chief executive Shantanu Narayen said today that the debate is over.

Narayen spoke at the D9 conference in Rancho Palos Verdes, Calif., and he mostly repeated points that Adobe has made in the past. However, his appearance seemed to be Adobe’s clearest attempt so far to put the issue behind it.

Not surprisingly, Flash was the first thing that that Wall Street Journal columnist Walt Mossberg brought up during his on-stage interview with Narayen — in fact, Narayen said there was a bet within Adobe about how long it would take for Flash to come up. Apple, of course, has declined to support Flash on the iPhone and iPad, and CEO Steve Jobs has been openly critical of the technology, for example suggesting at the last D conference that Flash is on the decline. To get around Apple’s restrictions, Adobe now offers a way for developers who build Flash applications to convert them into iPhone apps.

“We will work around any arbitrary obstacles that are imposed in our way,” Narayen said.

More broadly, Narayen said Adobe’s goal is to give publishers and developers the tools they need to make their apps and content available on as many platforms as possible. And that’s exactly what the company is offering, Narayen said, with the Flash-to-iPhone converter, as well as Android’s support for Flash and Adobe’s related AIR technology. So does that mean the debate is over?

“It is from our point of view,” Narayen said.