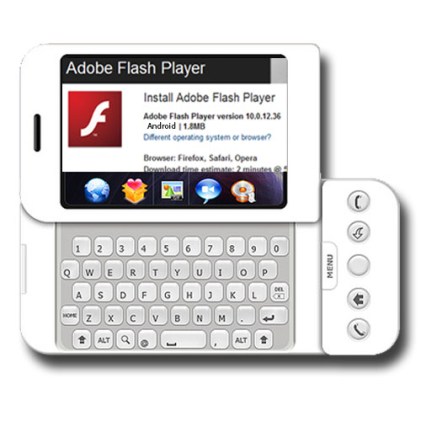 On Adobe’s earnings call last week, chief executive Shantanu Naraye said his company will introduce version 10 of its Flash multimedia player for Android this October at Adobe MAX 2009. This comes on the heals of handset manufacturer Sony Ericsson’s announcement that it will release its first Android 2.0 handsets with “more multimedia capabilities” the same month.

The significance is that Android developers will build better-performing apps, that can live outside of any official “app store.”

So far there’s only Flash light running on some platforms and no Flash running on the mighty iPhone. That’s because of two barriers, 1) an engineering challenge to get a high-performance Flash running, and 2) issues of control. To get high performance, you need to run in the lower layers of the OS or phone. Google Android, Palm WebOS, Microsoft Windows Mobile and Nokia Symbian are open to that, but RIM’s BlackBerry and Apple’s iPhone are not.

Then there’s the control issue. Flash applications don’t need to be submitted to the Apple App Store. In the app store, you download native or native-like apps directly to your iPhone. With Flash, a developer can build an app, put it onto any web server, and launch the app from the web server.

Now, with Flash 10 confirmed to come, Android developers will be able to use “real” Flash and large chunks of their web code for mobile, adding a new dimension to the use of Flash in mobile. On top of that Flash 10 is a quantum leap in performance. Flash Lite, simplified, is a poor version of Flash 8. Between Flash 8 and 10 there are three years of development. Flash Lite has relatively poor graphical performance and handles sound poorly as well.

Last week’s announcement is the first of a wave of announcements to come. At this year’s Mobile World Congress, Adobe announced the Flash 10 will be available on Google Android, Palm WebOS, Windows Mobile and Nokia S60/Symbian devices this year. The adoption of Flash 10 among developers will make it easier for leading aggregators like GetJar or Thumbplay to enable content creators to deliver their applications to mobile users via their Web catalogs — across all platforms mentioned.

A couple of days ago, the first account of a baked version of Flash and Skype running on Android was published. It gives an example of the potential of the Android and Flash combination and the threat the duo poses to the iPhone:

What if you could do Skype VoIP & video conferencing on the Google Android? Sounds pretty damn cool, doesn’t it? Especially given all the media hype surrounding the new iPhone 3GS. I already tweeted my displeasure that the new Apple iPhone 3GS doesn’t support Flash and also tweeted my annoyance that Apple didn’t put a front-facing camera for video chat support using Skype. Thus, while the iPhone supports a native Skype app, it only supports VoIP and not video chat. And don’t expect video chat anytime soon either. As Skype Journal remarked, “iPhone programmers can use the webcam to store video to a file, but won’t be able to write apps that manipulate or route the stream. This means Skype for iPhone won’t be able to add video calling any time soon.

Note: The above anecdote was an unofficial hack, done with the Flash player extracted of the firmware of the yet to be released HTC Hero Android device.

We’ve already discussed the web versus app wars and intensifying competition between Google and Apple. Overall, both companies are allies in pushing the mobile web. Yet they do so by different means. For Google it’s about enabling native apps, the web, and hybrid forms of the two. Google intensely pushes new web technologies that seek to make the Web even more compelling for mobile, thus bringing the richness of the PC browsing experience onto mobile devices. For Apple it’s all about the app. The openness of Flash 10 for Android and, in the future, Palm WebOS, Windows Mobile and Nokia S60/Symbian will cause the next strain in the alliance.

[Are you an entrepreneur or executive active in mobile? Join us at MobileBeat 2009, our mobile conference for industry leaders, where executives from Getjar and the Google Android Market will debate what comes next after the app store. Sign up soon.]