Just days after Apple announced a $1 billion investment in Chinese ridesharing service Didi Chuxing, CEO Tim Cook arrived in Beijing for an Apple-hosted event. The event brought together a panel of app developers at the Apple Store in Wangfujing, Beijing, as well as the founders of Chinese startups Toutiao, Tap4Fun, Meituan Dianping, and DayDay Cook (no relation to Tim).

Cook and Didi President Jean Liu beckoned a Didi taxi to travel to the event.

“Apple invested in Didi last week; we are very proud of that investment,” said Cook. “Didi has 14 million drivers, 300 million users… actually 300 million and one now, because Jean and I took a Didi ride here this morning.” 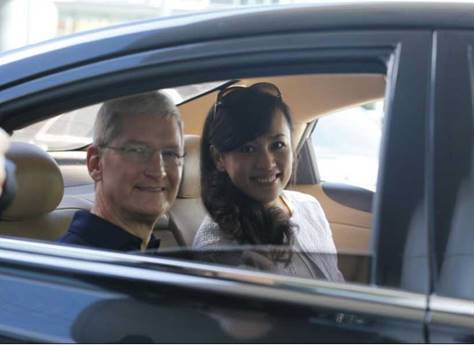 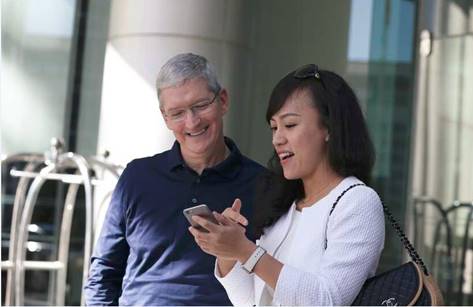 Didi Chuxing came to fruition in early 2015 following a merger between two local rivals, Didi Dache and Kuaidi Dache, which had been backed by Tencent and Alibaba, respectively. While Uber is striving to tackle the lucrative Chinese market by using profits from markets where it’s already leading, Didi Chuxing is going from strength to strength domestically.

“In the fall of 2012, two Chinese developer teams were thrilled to see their products (Didi and Kuaidi) launch on the App Store,” said Liu, who moderated the panel today. “Two and a half years later, these two teams merged to become the Didi Chuxing family. Now we are serving over 300 million users with 8 product lines. Every day, over 11 million rides are completed on our platform. Meanwhile, our collaboration with Apple enters into a new stage. There are many similar stories like ours. Apple and the App Store are not only the role model of the entire tech world, they are also the grass root platform for aspiring innovators. This is where dreams take off.”

Services will no doubt prove pivotal to Apple’s future, which is partly why it has invested so heavily in Didi. Apple also launched Apple Pay in China earlier this year, with Jennifer Bailey, vice president of Apple Pay, saying at the time: “We think China could be our largest Apple Pay market.”

That Apple, an American firm and one of the world’s most valuable companies, has plowed $1 billion into Didi Chuxing is not only a huge boost to Didi’s quest to stay ahead of Uber, it’s also indicative of Apple’s efforts to woo China after some challenging times in the country. With smartphone sales weakening and Apple having recently lost an iPhone trademark dispute, not to mention some of its online entertainment services being suspended, Cook has been going the extra mile to sweeten local officials and companies. Apple needs China.