Facebook and Twitter may dominate discussions about mobile native ads, but Airpush says it’s about to steal some of their thunder.

The mobile ad network, which is plugged into roughly 120,000 apps, says it’s working on a new kind of mobile native ad format that any app, no matter how big or small, can take advantage of.

“Native advertising” refers to ads that take the form of the content that surrounds them in an effort to attract the user’s eye. While the idea has been popular among cash-strapped online publishers as of late, there have been few attempts to offer something similar on mobile phones.

To that end, the company has acquired app discovery platform Hubbl for $15 million. Hubbl, which was founded just last year, says it has both the data and the expertise to help Airpush as it develops its new native ads product.

“If you’re an app developer, you want ad content that maximizes the monetization potential of your app. Our platform will do that,” Hubbl CEO Kushal Choksi told VentureBeat.

Unfortunately, neither Hubbl nor Airpush would give us much information on this native ad platform, which they plan to unveil early next year. 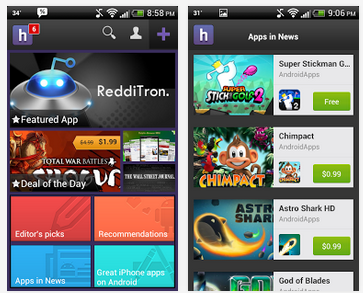 Above: Hubbl makes it easier for smartphone users to find new apps.

Asher Delug, Airpush’s CEO, did, give a few hints, however.

“Apps today don’t have an actual stream or another traditional delivery mechanism for native ads,” Delug said, pointing to the in-stream native ads that have become common in the mobile apps of Twitter, Facebook, and even Tumblr.

Airpush, however, plans to turn that around by creating a native ad platform that any app developer, not just the tech giants, can take advantage of.  Again, it’s all pretty vague, but as far as we understand it, the platform will make it easier for developers to hook native ads directly into some of the functionality of their apps.

A native fix for mobile advertising

That new approach might end up attracting more developers to Airpush’s platform.

As Delug points out, one of the big disadvantages mobile ad networks have is that, unlike web ads, there’s no tracking cookie for the ads found in smartphone apps. And while ad networks like Millennial Media have turned to things like location profiles to make up for that disadvantage,  the industry is still in search of something more powerful.

As it turns out, that “something else” is also what led Airpush to Hubbl, whose platform has helped it create some extremely detailed profiles on the smartphone users who are running its app discovery app.

By analyzing exact what apps users have installed, Hubbl has been able to get a good sense of those users’ interests. Users who, for example, have both the apps of Delta Air Lines and American Airlines installed on their phones might be heavy travelers, and knowing that means that Hubbl also knows to serve those people travel-related ads.

In other words, app profiles could end up being the tracking cookie of the mobile web (which isn’t really a web at all, if you really think about it.)

“This is a specific solution to a problem that’s plagued our entire industry,” Delug said.