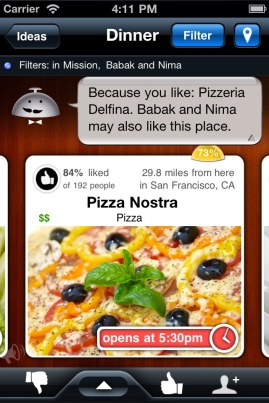 Understanding context is vital to Alfred’s function. Unlike many web apps that rely on data, Alfred learns your tastes by discovering patterns. By connecting those patterns to places in its database, Alfred starts to develop a picture of the real world through your eyes. And once you’ve taught Alfred about yourself by answering as few as four questions, these patterns travel with you whether you’re in San Francisco, New York or Seattle.

The Cleversense team would like you to think of Alfred as “Pandora for the real world.” The first use case is for restaurants and venues, but there’s a whole world of information out there ready to be sifted. Pahlavan says he foresees a day when people will use Alfred to search for products and other physical objects they may like based on what they’ve already told the app about themselves.

Group recommendations are particularly challenging from a technical standpoint. The algorithm must take into account the preferences of several people and find a happy medium. But Pahlavan says that once the app is loaded on everyone’s phones, the education process takes as little as a minute, and then Alfred’s ready to make recommendations.

Using Alfred together with the new Siri voice assistant in Apple’s iOS 5 devices seems especially promising. While Siri makes sense of what you’re saying and builds queries around it, Alfred considers everything you’ve said.

To become profitable, Cleversense hopes to offer an API to third-party developers and serve as the business brain for a wide variety of applications. “Generally speaking, people want curated content,” says Pahlavan. “We have the capability to do it for everyone.”

Alfred was downloaded more than 100,000 times in its first month, launched in the iTunes App store in September, and the user base is growing by 20 percent per month, says Pahlavan. The company has raised $1.6 million in angel funding from Bobby Yazdani, of Saba Corporation.