Aliph, a Silicon Valley maker of a remarkably effective noise-reducing headset, has been able to do what a lot of companies haven’t in the wireless headset market: Sell something expensive while the competition is selling cheap stuff.

The company has so far sold millions of its Jawbone wireless cell phone ear piece units since launching in 2006, at a hefty price of $120, in a commodity market where cheap ear pieces sell for $40.

It has done so with a unique audio technology that it had been working on since 1999. The Jawbone Bluetooth headset has features enabling its user to hear their calls more clearly, even in noisy environments.

Today, the company is launching its second-generation product. (We were invited to a launch party last night, and picked up the new ear piece to try it out). The price has been increased to $129, but it’s worth it. 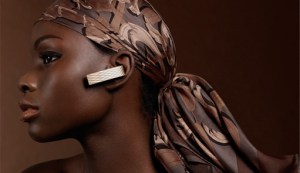 The new Jawbone is smaller and has a sleeker design. It’s as thin as your little finger, and it’s simpler to use than the first version — and based on a testing this morning, it’s just as good, if not a tad better, at noise reduction.

Aliph chief executive Hosain Rahman did say the new headset has better noise elimination. It’s also meant to fit better on most ears, and Matt can confirm that it does have an easier, snug fit. Both of us bought and used the first generation Jawbone, and found it remarkably good at reducing noise. Matt tried out this second version. He turned on the microwave and called a friend while standing right next to it; his friend’s voice crackled for the first few seconds, but became much clearer and clearly audible thereafter. The friend could hear him fine, with almost no noise in the background. On the other end, she ground some coffee beans next to her phone. Even though she had no jawbone, Matt’s Jawbone kicked in and the noise was sharply reduced after about three seconds.

It now has a leather-covered hook for the ear instead of a plastic one (a good thing because the plastic broke off on one that Dean used) and it is 50 percent smaller. Matt’s first Jawbone broke when he tried pulling off the power socket, in part because the first version’s design was too delicate; the second Jawbone feels more robust, and the power socket fits on easier.

The Jawbone features a patented design where a small plastic nub rests on the cheek of the user. It records the vibrations and movements from the user’s jawbone and uses that data to determine what the person is saying. It then uses an audio processor to filter out background noise. Aliph calls this the Jawbone Noise Assassin, a technology originally developed by the Department of Defense’s DARPA agency for battlefield use. The Jawbone also raises the volume of the headset whenever the user is in a noisy place. The company claims it eliminates 10 times as much noise as rival headsets.

The new Jawbone goes on sale at AT&T stores around the country. Bluetooth headets are expected to top 120 million units sold in 2009, partly because some states such as California will require that drivers use such headsets when using cell phones in a car.

Aliph is based on San Francisco and has been funded by Khosla Ventures and Sequoia Capital. It competes with other audio technology companies such as Audience, which recently raised a $15 million round for its audio processing chips.

The new Jawbone weighs 10 grams, has four hours of talk time on a battery charge, has eight days of standby time, and charges in one hour.