WhatsApp’s much discussed move to support voice calls is nearing completion, as news emerges that anyone on Android can now make calls in-app to other WhatsApp users.

The Facebook-owned mobile messaging company first revealed its plans to introduce voice calls way back in February last year, but it wasn’t until the past few months when the feature first started showing up in some Android users’ apps. Things subsequently opened up a little, with the feature being made available to anyone who received a call from another WhatsApp user who had voice calls unlocked. 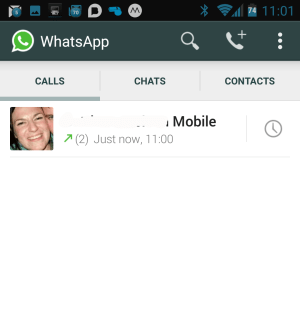 Some reports suggest that the latest official version on Google Play includes the voice-call feature automatically. However, based on our tests it was necessary to upgrade to version 2.12.19 directly from the WhatsApp website.

Now, you’ll see an extra tab beside Contacts and Chats called — drum roll — Calls. You then tap the little call icon at the top right-hand side, and you’ll be able to call your WhatsApp contacts. Based on our tests, the call quality was pretty awful though, with huge lags in the conversation. It’s clearly not a finished feature, so hopefully WhatsApp will still improve on it in the coming weeks and months.

WhatsApp cofounder Brian Acton also recently revealed the voice call feature would be arriving on iOS in the coming weeks.

WhatsApp’s move to include voice calls follows the convergence trend we’ve seen across the mobile messaging realm. Indeed, the degree of differentiation between the various players is shrinking, with the likes of Viber, Korea’s Kakao Talk, Facebook Messenger, Japan’s Line, and now WhatsApp all offering voice.

WhatsApp has also semi-emulated its competitors by introducing a web-based client of sorts, which was a major departure for an app that began as a mobile-only affair.

Some questioned whether Facebook paid too much to acquire WhatsApp last year, with the $22 billion price tag certainly seeming lofty at the time. However, with one billion installations on Android alone, and 700 million-plus active users sending 30 billion messages each day, Facebook’s move was all about future-proofing itself from the ever-shifting sands of technological change. And by throwing voice calls into the WhatsApp mix, Facebook is striving to cover all communication bases.