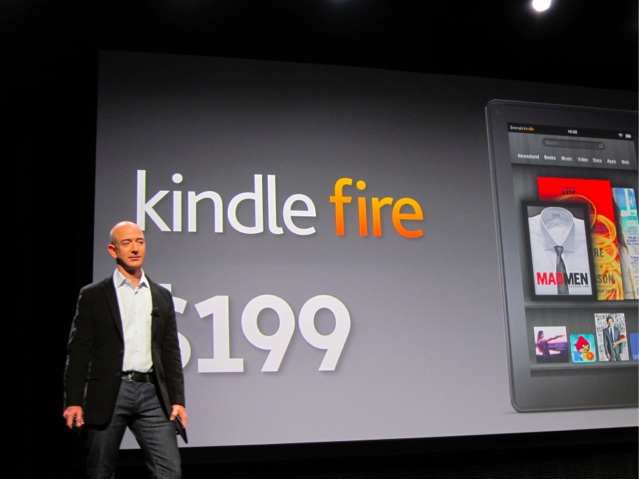 Today we finally got our first glimpse at Amazon’s Kindle tablet at a New York City press event, and the company also introduced cheaper Kindle e-readers with touch capabilities.

Kindle Fire. It’s a 7-inch Android tablet with a dual-core CPU and a color LCD screen. It’ll cost $199, ships November 15, and you can pre-order it today. It has a new browser called Silk that makes use of Amazon’s cloud infrastructure to speed up browsing.

$79 Kindle. This is an upgraded E-Ink Kindle, minus the keyboard, but without 3G. Just like the Kindle Touch, Amazon is pushing the cheaper pricing with Special Offers. This Kindle will cost $109 without the offers.

Here’s the blow-by-blow on the announcement event.

Amazon CEO Jeff Bezos hit the stage to discuss the skepticism many people had about the original Kindle e-reader. He showed off a slide that demonstrated how Kindle book sales skyrocketed, especially in comparison to the trajectory of physical book sales.

First, Bezos announced the Kindle Touch, an upgraded E-Ink Kindle with an infrared touch screen. It’ll retail for $99 with Amazon’s Special Offers and $139 without. It features “EazyReach” tap zones, which make it easy to switch pages on the touch screen with one hand. There’s also an “X-Ray” feature, which includes definitions and short Wikipedia snippets that are easily accessible while reading a book. Additionally, there will be a 3G version of the Kindle Touch for $149 with Special Offers ($189 without). Both will ship Nov. 21.

For those who don’t want any touch capabilities, Amazon will offer an upgraded version of its original Kindle design for $79 with ads. “We’re offering premium products at non-premium prices,” Bezos said. “We’re going to sell many millions of these.” 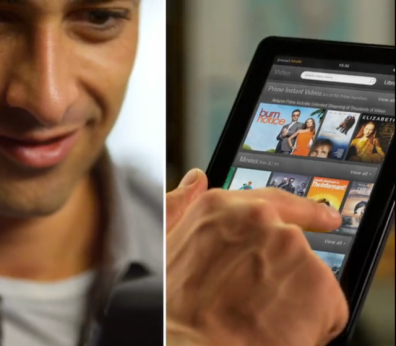 Finally, Bezos pulled out the Kindle Fire. It’s a 7-inch tablet with a dual-core CPU, just as many rumors have suggested. It’ll retail for $199 when it ships on November 15. You can pre-order the tablet today.

“From Kindle, Fire is born,” a TV spot for the tablet said, which also explains its somewhat confusing name.

As expected, it’ll have full integration with all of Amazon’s services, and everything you purchase will be available on the cloud, even after you delete it. The tablet also expands on the Kindle’s WhisperSync technology, since it will be able to wirelessly synchronize music and movies. You’ll also be able to synchronize what you’re watching on the Fire with your TV (for supported sets).

The Kindle Fire features a carousel of your most recently viewed content. You can also pin favorite items to the home book shelf. This definitely doesn’t look like any Android tablet we’ve seen before. Bezos played a clip from X-Men: First Class, which played smoothly. 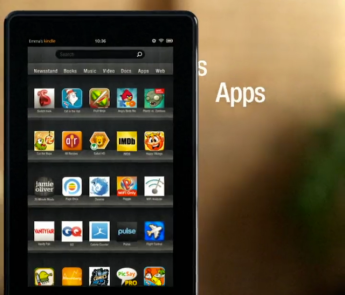 Bezos went on to demonstrate just how much Amazon’s website has changed since it first launched, which featured some text and a single image. Today’s Amazon site is 63 times larger. He said the company has been exploring how to use its EC2 cloud to speed up browsing — that thinking led to Amazon Silk, a new browser on the Fire that takes advantage of EC2.

Basically, Silk splits up the web browser into something that’s stored both locally on the tablet and something that exists in the cloud. “The browser observes aggregate user behavior across a large number of sites,” an Amazon representative said. It can tell which page users will most likely hit next, and make that page faster to access. Best of all, Silk optimizes the browsing experience without any need for user intervention. It invisibly makes web browsing faster.