Amazon’s new Kindle Fire tablet and Kindle Touch look like the company’s best consumer devices yet, based on demonstrations from Amazon staff at the company’s launch event today in New York City. 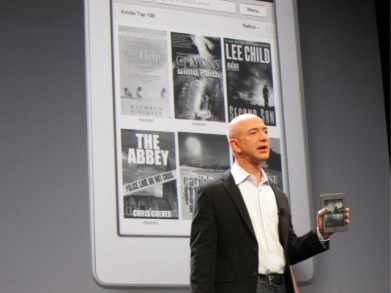 Unfortunately, Amazon didn’t let me or anyone else get their hands on the new tablet and e-reader to test it out. Most likely, the devices shown today still need some software tweaks. But based on these demonstrations alone, I have a feeling that it’s going to be another smashing holiday season for Amazon’s Kindle family.

Software-wise, the $199 Kindle Fire definitely doesn’t resemble any other Android tablet, except for perhaps Barnes & Noble’s Nook Color. It features a customized carousel-based interface that shows off your recently added content, as well as a more traditional bookshelf to keep your favorite content within reach. The tablet moved along smoothly in the demonstration, thanks to its dual-core processor.

It’s difficult to judge just how well the Kindle Fire performs yet. The demonstrator played a clip (which I believe was in high-definition) from the film X-Men: First Class, and played a short round of the game Fruit Ninja. But there are plenty of smartphones on the market that can perform both of those tasks today without a sweat. The real test for the Kindle Fire will be how it juggles more intensive games, as well as multiple types of content at once.

As for the Kindle Touch, it appears to work just like other touch e-readers from Barnes and Noble, Kobo, and Sony, which also offer infrared based touch interfaces. The $99 e-reader ($139 without Amazon’s Special Offers ad feature) lets you change the size of text by pinching and zooming, just as you would with a modern touchscreen smartphone. The Kindle Touch has a couple features not found in the competition: It has “EasyReach” tap zones, which let you turn pages easily with one hand, as well as an “X-Ray” feature, which makes factoids and Wikipedia entries about the page you’re reading easily accessible.