Amazon has finally launched its consumer goods-ordering Dash Buttons program outside the U.S., with the news that it’s now available in the U.K., Germany, and Austria.

The internet giant first introduced the Wi-Fi-connected buttons in the U.S. in March last year, letting consumers reorder items such as coffee, paper towels, or detergent by hitting a physical button that has been pre-programmed with their Amazon account credentials. In the 18 months since, Amazon has added dozens more brands to the Dash program. 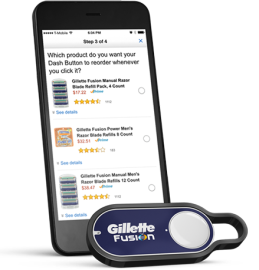 Removing friction from the online buying process is something Amazon — along with other ecommerce companies — has been pushing for quite some time, and a physical button that doesn’t require immediate access to a computer or smartphone is one way to make consumers’ lives easier.

You probably wouldn’t want a Dash button for every single item in your house, but it might be handy for parents who go through a lot of diapers, or night owls who consume coffee like it’s going out of fashion. The Dash Buttons cost $4.99 (£4.99 / €4.99) to buy, but are effectively free because users receive five bucks off their first order.

It’s also worth noting here that Dash Buttons are only available to Prime members — those who subscribe to the $99 (£79 / €49) annual service that comes with a bunch of other perks, such as an on-demand video service and free deliveries within the hour.

In addition to Dash Buttons, Amazon also announced that it’s launching its Dash Replenishment Service (DRS) (in the aforementioned markets) — a cloud-based service that lets device-makers configure their connected contraptions to reorder physical goods automatically from Amazon. This could be a printer that reorders ink or a dish washer that reorders tablets.

Again, this is all about Amazon removing friction from the reordering process, making customers’ lives easier, and lining its own coffers.