Amazon unveiled a brand new Fire tablet today, as the internet giant also revealed that its voice-activated assistant Alexa is being extended to tablets for the first time.

Available in black, magenta, blue, and tangerine, the upgraded Amazon Fire HD 8 promises a notable bump in technical specifications compared to the previous generation Fire HD 8 that launched last September. It now claims up to 12 hours of battery life (rather than eight hours), 50 percent more RAM (now with 1.5GB), and supports up to 200GB of storage via the MicroSD card slot. But perhaps most notable here is the price cut — the previous version of the device weighed in at $150, but the all-new incarnation has been scythed down to just $90. There is also a more expensive ($119.99) 32GB storage option available. 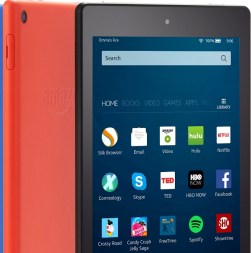 While the $90 price tag does offer pretty good value, perhaps the bigger news to emerge today is that Amazon is finally bringing Alexa to its Fire tablet range. For the uninitiated, Alexa is Amazon’s voice-control system that rose to prominence as the brain behind the Amazon Echo — you ask her to do something verbally using her name (e.g. “Alexa, play some music”), and she complies.

Alexa won’t be available on the new Fire HD 8 at first, which is a little surprising, as that could’ve been a nice additional incentive to upgrade or switch to the new tablet. Instead, Alexa will be arriving through an over-the-air (OTA) software update “in the coming months” and will be made available to the new Fire HD 8, the Fire HD 10, the Kindle Fire, and the previous generation Fire HD 8.

The new Fire HD 8 opens for preorders in the U.S., U.K., Germany, France, Italy, Spain, and Japan today, though Alexa will be limited to the U.S. market. Shipping begins on September 21.