After weeks of rumors, Amazon has officially lifted the lid on its new budget tablet.

The $50 device sports an impressive 1.3GHZ quad-core processor, 7-inch display, front- and rear-facing cameras, and 8GB of internal storage that can be expanded up to 128GB via microSD. It’s open for pre-orders now, and will start shipping from September 30, in the U.S., U.K., Germany, Japan, France, Italy, and Spain.

“Today, we’re taking another step in our mission to deliver premium products at non-premium prices,” said Amazon CEO and cofounder, Jeff Bezos, in a press release. 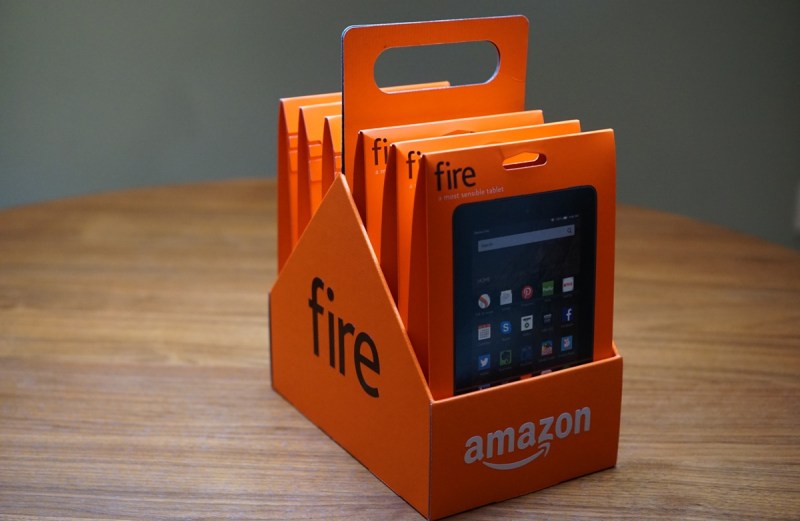 Perhaps one of the quirkiest facets of the new budget Amazon tablet, however, is that you can buy it as part of a six-pack, like beer — it’s buy five, get one free. Indeed, it’s clear that Amazon’s plan to help the tablet proliferate is to entice people into buying in bulk and distributing the devices among friends and family as presents. To do this, you simply choose “6” as your quantity from the drop-down menu and enter the promo code FIRE6PACK at checkout.

For the launch of all the new tablets, Amazon is also rolling out a new version of its operating system, Fire OS 5, nicknamed “Bellini.” The company says the big focus here is on entertainment, with a refreshed user interface, and “deep integration of Amazon-exclusive services,” which likely means the Kindle bookstore, and Amazon Instant Video / Music for Prime subscribers.

While there’s little question the price will appeal to many people, digging down into the specs reveals the story behind the price tag. The 1024 x 600 IPS (171 ppi) display is fine, but it won’t win any prizes. And the 2MP rear-facing camera and VGA front-facer are hardly aimed at photography buffs. But then again, you do get what you pay for.

That said, Amazon is known for pushing the boundaries to find ways to keep its costs down, even if that means it doesn’t make any money from these devices directly — it hopes to monetize by selling content through associated online services. In short, even though the new Fire edition is ludicrously cheap, it may well pack a greater punch than its price suggests.