Kindle fans, rejoice. Amazon has listened and is finally bringing a waterproof ereader to market — almost 10 years after the internet giant debuted the first Kindle device.

The all-new Kindle Oasis comes 18 months after its same-named sibling was introduced to the world, and the latest incarnation boasts a number of notable upgrades, in addition to its newfound water-repelling powers.

Weighing in at 194 grams and 3.4mm thick, the refreshed Kindle Oasis sports a 7-inch display — one inch larger than its predecessor. 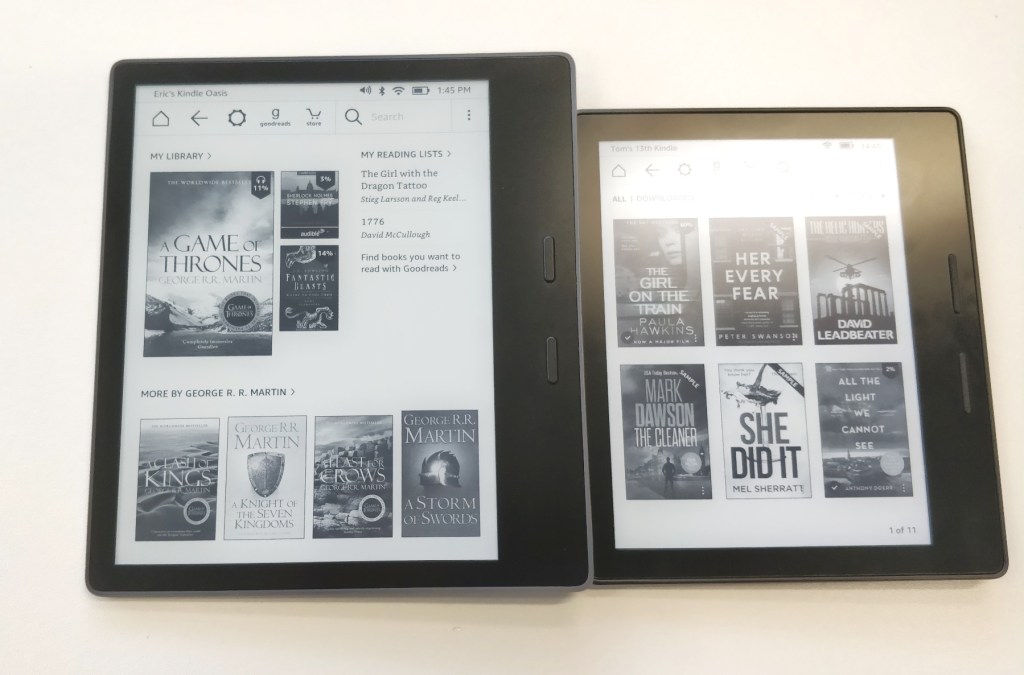 Furthermore, the original Oasis had a built-in battery that promised around two weeks of power, but it also shipped with a separate battery cover that connected to the Oasis via a little port on the rear to give it another seven weeks.

The new Oasis is different. It no longer has a little connector on the back — instead it has an all-aluminium rear and a promise of around six weeks of power via the built-in battery. 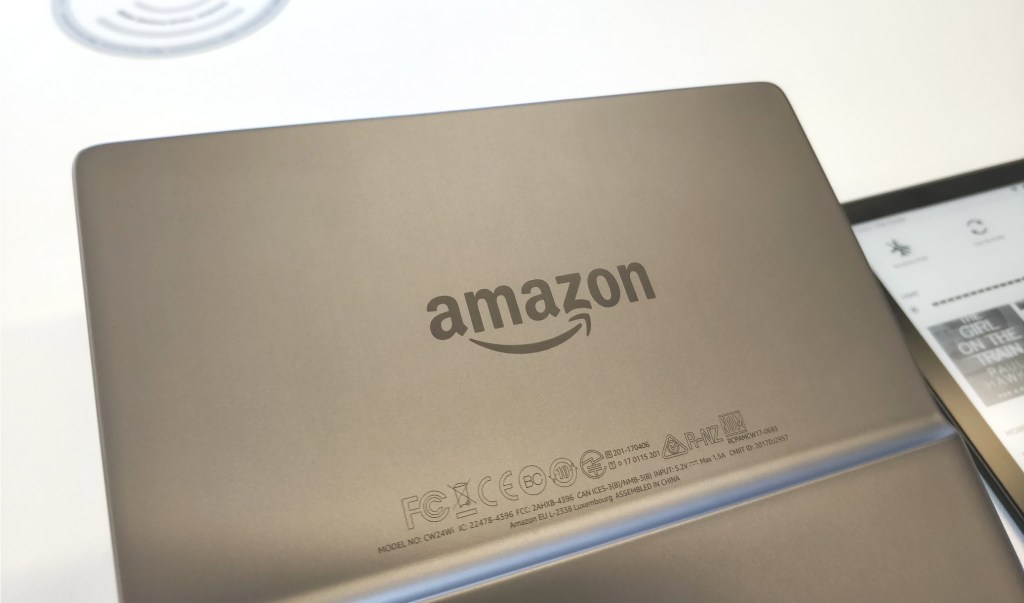 The new Oasis also brings back adaptive lighting, which automatically alters the front light based on the environment — this was a feature of the 2014 Kindle Voyage.

But arguably the most interesting new Kindle Oasis feature is deep Audible integration.

Though some earlier versions of the Kindle supported audiobook playback, replete with built-in speakers and headphone jacks, you certainly couldn’t flip effortlessly between a text-based book and the audio counterpart of that same book without switching to the Kindle or Audible mobile apps. With Whispersync for Voice on the new Kindle Oasis, you will be able to listen to an audiobook while in the car coming home from work, then switch back to the textual version when you get home — everything will by perfectly synchronized on the same Kindle.

But if you think this means that Amazon has added a 3.5mm headphone jack to the Kindle, well, think again — the audio will only work across Bluetooth. 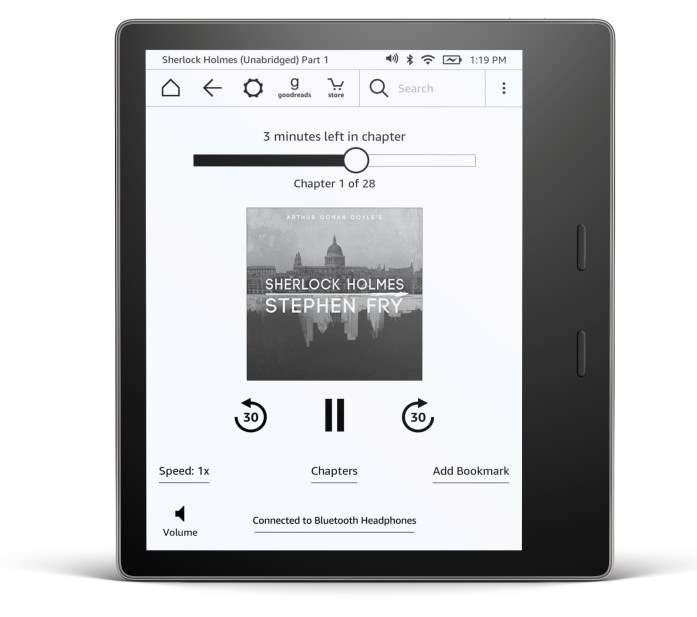 If you already procured a new Kindle last year, you’re in luck, too. During a demo of the new device last week, Amazon confirmed to VentureBeat that the very same Audible integration will be added to the first-generation Kindle Oasis that launched last year — via an over-the-air (OTA) update in the coming months.

You may also recall that last year’s entry-level Kindle (generation 8) came with Bluetooth audio support out of the box. However, this was mainly for accessibility, as it gave visually impaired readers additional options, such as navigation prompts. Later this year, Amazon will put this Kindle’s Bluetooth capabilities to use through Audible via a similar OTA update.

Kindles have come a long way since the Kindle 1 arrived back in November 2007. Gone are the physical keyboard and headphone jack (see below), and here are Bluetooth, deep Audible integration, and adaptive lighting. And now — finally — the device is waterproof. 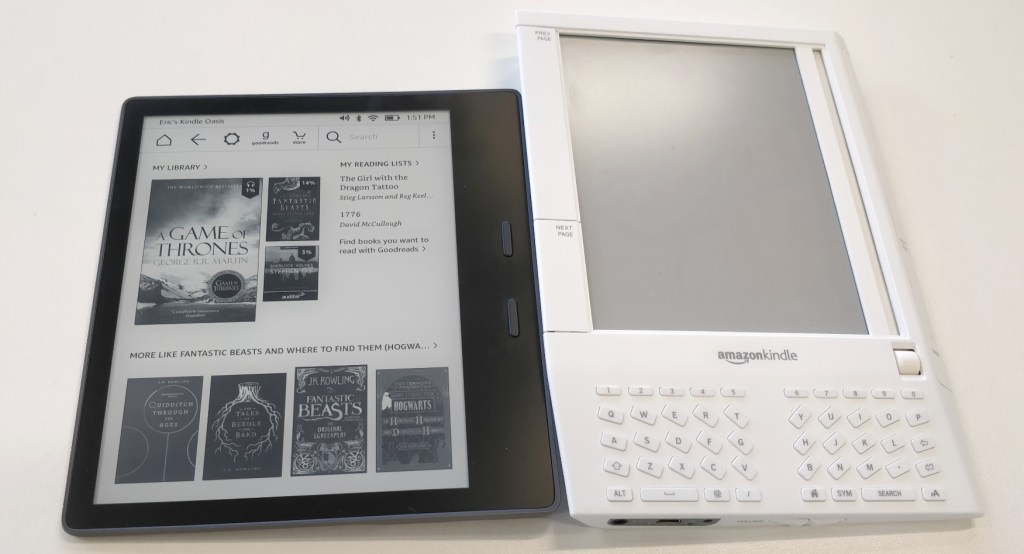 Above: Kindle Oasis versus Kindle 1

One recurring criticism of the Amazon Kindle over the years has been that if you like to read in the bath, well, you’ll be out of luck if you drop the device. The criticism was even more pertinent as Kindle pricing approached the $300 mark (as with the original Oasis).

Rival ereader companies like Kobo have had waterproof devices on the market for quite a few years already. Now, Amazon can boast that its IPX8-grade waterproof ereader can be submerged in two meters of fresh water for an hour, which should go some way toward placating Kindle fans.

The new Kindle Oasis opens for preorders today and will start shipping on October 31. Pricing starts at $250 for the 8GB model and $280 for a 32GB incarnation. There is also a $350 model that offers free cellular connectivity, allowing you to download books without relying on Wi-Fi.