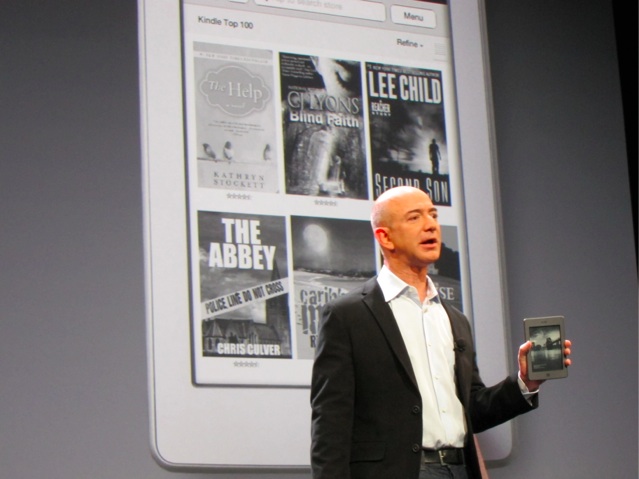 Once again, there’s word that Amazon is working on a smartphone, this time from Bloomberg. And given the success of the Kindle Fire so far, which has been the only Android tablet worth buying since its debut (the Nexus 7 now holds that title), it’s not surprising to think Amazon would want to get into the smartphone arena as well.

But I can’t imagine Amazon would simply spit out a smartphone without any further innovation.

Considering it’s already one of the best sources for smartphone deals on the web, I think it’s just a matter of time before Amazon starts reselling wireless data services on its own as well. Even without its own phone, reselling wireless service would make Amazon the one-stop shop for practically any mobile device. And if it’s prepaid, the service would be particularly enticing for tablet users, or anyone who doesn’t want to sign up for yet another cellular contract.

Offering prepaid cellular service wouldn’t be a huge stretch for Amazon. The company has offered its “WhisperNet” service since the very first Kindle, which originally used Sprint’s EVDO network to offer anytime data connectivity to its e-readers. Now WhisperNet is running on AT&T’s 3G network.

Amazon has proven itself adept at being a step ahead of the competition with the Kindle, Kindle Fire, and its ubiquitous cloud computing services. Offering its own wireless service would definitely give it a leg up on practically all other mobile device manufacturers — even Apple — which still have to deal with traditional carriers.

According to the Bloomberg report, Amazon is said to be working with Foxconn (which also manufacturers the iPhone and iPad) on the phone. Just like the Kindle Fire, I’d expect Amazon to power the phone with a tweaked version of Android. The company has also been buying up wireless patents to protect itself from the wave of patent litigation sweeping the mobile market.

“My guess is that Amazon will indeed come out with a smart phone, but it will be much like Fire – tied to Amazon content and services, and may even include an e-wallet for purchasing from Amazon,” said Jack Gold, principal analyst at J. Gold Associates. “That is where they made their money, not in the sale of the device itself. So expect it to be aggressively priced (again, like the Fire model).”

“As for reselling wireless, this is a bit more iffy,” Gold added. “Amazon could certainly become an MVNO – there are lots of carriers that would work with them. But I don’t see any real reason for them to do so other than account control. There is not a lot of profit to be made as an MVNO (the carriers make most of the money). If I were Amazon, I’d just provide an unlocked phone and let the buyer pick a SIM for whatever carrier they want. Amazon will make plenty of money on the services, and they won’t have to guess which carrier to provide users that will offer the best service in their location.”

The last time we heard rumors of Amazon building a phone, I wasn’t too excited about the idea. After all, why would Amazon want to jump into the overcrowded Android phone market? But given just how well the Kindle Fire has done, as well as the clear need for a simple prepaid wireless service in the mobile world, an Amazon phone all of a sudden becomes a much more interesting prospect.