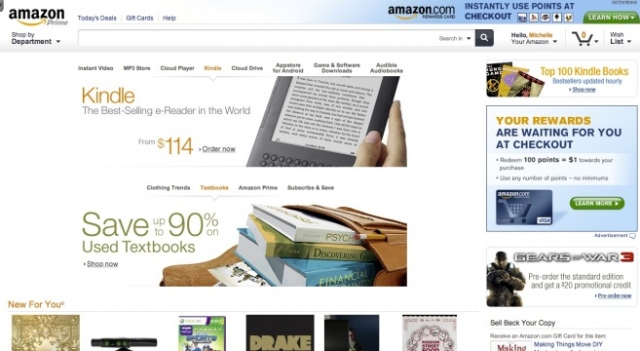 This weekend, Amazon confirmed the company’s website is in the midst of a striking redesign to will simplify and optimize the interface for tablets.

We first heard Amazon was testing a new site design last week. The redesign was confirmed today to the Wall Street Journal.

Based on a trove of images floating around the web, the new design features less clutter, more white space, larger menu navigation buttons and a re-worked search bar. The site also will emphasize features such as Instant Video, MP3s, Cloud Player, Kindle, Cloud Drive, Android apps and audio books — categories that might entice someone browsing from a tablet.

The site redesign news makes a lot of sense when you consider Amazon’s upcoming tablet. Numerous reports say this new 7-inch Android tablet will launch in November for $250, half the price of the most basic Apple iPad 2.

A Forrester Research analyst predicted that a new Amazon tablet selling for less than $300 could sell as many as 5 million units in 2011 and make the device the second most popular tablet in the world after the iPad.

“Thus far, Apple has faced many would-be competitors, but none have gained significant market share,” Forrester analyst Sarah Rotman Epps wrote in her findings. “Not only does Amazon have the potential to gain share quickly, but its willingness to sell hardware at a loss, as it did with the Kindle, makes Amazon a nasty competitor.”

To us, the upcoming tablet and site redesign bits both sound like strong moves for Amazon. These moves show the company is looking to evolve into a mobile powerhouse that’s not just concerned with dominating ebooks and offering a massive online marketplace. If a low-priced tablet and tablet-friendly UI emerge soon, Amazon will also be getting more customers to buy music, video content and Android apps from their tablets and mobile devices. We’ll see if these bold moves pay off for Amazon later this year.