Advanced Micro Devices chief executive Rory Read said the company expects a diversifying product base will help its revenues in 2014, but the core PC chips market will weaken.

But while Read sounded optimistic, AMD noted that its first quarter sales would be down 13 percent to 19 percent from the fourth quarter. As the second-largest maker of computer microprocessors, the Sunnyvale, Calif.-based AMD is a leading indicator for both PC sales and video game console sales. 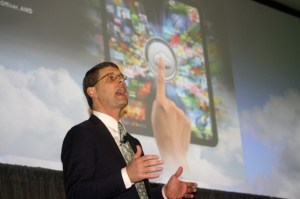 Above: CEO Rory Read of AMD.

Read said in an earnings conference call that analysts expect the overall PC market to shrink about 10 percent in revenue in 2014. He said he expects AMD’s results to be similar, with a chance to grow faster if certain factors improve. But he noted the market was “unpredictable” and that AMD would make its forecasts quarter by quarter.

“The area that is the most difficult and has been affected by tablet is the entry-level notebook, and we were way over-indexed in that category,” Read said.

Q1 revenues for PCs and graphics will be down, per seasonal and product launch patterns. Read said that one closely watch product category, chips for ARM-based servers, will have news soon. He said AMD expects to complete designs on its first 64-bit ARM-based server chips in the first quarter. ARM servers are a potential big market as a larger number of vendors will invade the x86-based server chip market that is traditionally dominated by Intel.

Read said that consumer notebook chip sales were weak in the fourth quarter. That has been a weak point in the market as consumers move toward smartphones and tablets.

AMD said today that its non-GAAP earnings were 6 cents a share and revenues were $1.59 billion. Analysts had expected earnings of 6 cents a share on revenue of $1.54 billion. In the quarter, AMD shipped large volumes of chips for video game consoles that sold big numbers during the holidays: the Sony PlayStation 4 and the Microsoft Xbox One. Revenues were up 38 percent from a year ago. AMD hit its earnings targets.

AMD shares fell 9 percent to $3.79 a share in after-hours trading, largely on the weakness of the outlook.

“We believe the PC market will be continue to be down in 2014, but we will move into areas where we have been underrepresented,” Read said. “We’re obviously in the most difficult PC market in history.”

Last week, AMD announced its codenamed Kaveri processors, which are aimed at games and other high-performance applications. The Kaveri chip has 2.4 billion transistors and 47 percent of them are focused at producing high-end graphics. The chip is one in a series of accelerated processing units (APUs), which combine a central processing unit (CPU) and graphics processing unit (GPU) on the same chip.

The Kaveri chips, known as the A-Series APUs, will have four CPU cores, or brains, and eight GPU cores on one chip. The chips are also the first to use a new approach to computing dubbed the Heterogeneous System Architecture (HSA), which makes it easier to get around bottlenecks inside a PC and speed the whole system up.

Read said the company has completed its shift to a more efficient business model with significantly lower operating expenses.

In the fourth quarter, AMD’s customers shipped more than 7 million new game consoles to consumers. That was more than double the amount shipped in the first quarter of sales for previous game consoles, Read said.