Huberty says that Apple shipped 29 million to 32 million iPhones in its third quarter of 2013, higher than consensus estimates of 26.5 million, and that will boost Apple quarterly revenue to over $36 billion, also higher than the street expects. Both could have a significant positive effect on Apple’s coming quarterly earnings report, which is due next week Tuesday.

A positive quarter where Wall Street is looking for a major slump could be a major boon for Apple’s sagging stock, which has famously sunk from its heights of $700 to the $400 range. But Huberty’s report has not helped the company’s stock — at least not yet. 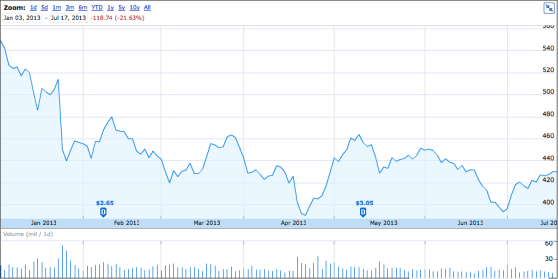 Apple stock is slightly down today to $430.

Huberty also expects Apple to move 18 million iPads this quarter and 3.9 million Macs. That would be a 50 percent bump on the year-ago quarter’s iPad numbers and a very slight drop — along with the rest of the PC industry — on laptops and towers.

Even if Huberty is using rose-tinted glasses, her worst-case estimates indicate that Apple will surpass its guidance of $33.5 billion to $35.5 billion for the June quarter.