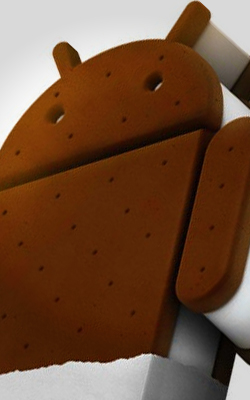 The latest version of Android, called Ice Cream Sandwich, brings beautiful design, longed-for features and brag-worthy technological advances, and we’ve got all the details below.

For all the awesome one-OS-for-all-devices information we knew about six months ago, check out our primer on Ice Cream Sandwich and how it’s going to end Android fragmentation, especially for mobile app developers.

(If you’re pressed for time, the gist of it is that Ice Cream Sandwich will work on tablets, TVs, smartphones, e-readers — basically, any Android device — and apps will scale automatically for any form factor.)

This is the “live” part of the post, where we give you a thrilling play-by-play of events as they unfold inside the Hong Kong Convention and Exhibition Centre.

7:00 pm, Pacific Time: First up, we have an announcement from Samsung and Google. Head of Samsung’s mobile business, JK Shin, takes the stage.

“2011 has been a very strong year for Android… the most popular platform in the world,” he began. “The harmony between the best hardware from Samsung and the best software from Google creates the best consumer experience in the mobile world… Today, Samsung and Google unveil the first Ice Cream Sandwich phone.”

The phone will be the Galaxy Nexus; here’s our breakout post on this new hardware.

7:10 pm, Pacific Time: Google’s Andy Rubin is now on the stage to talk about the next-gen Nexus phone and Android 4.0.

“We measure ourselves by three defining terms: Simplicity… beauty… and going beyond smart,” he said, alluding to massive amounts of cloud-based data and services being part of Android’s apps and platform. 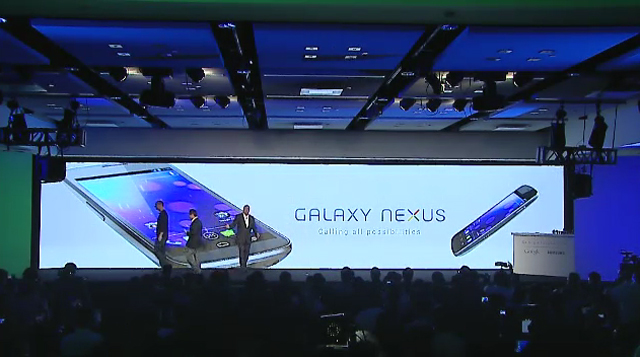 A Samsung executive next explains a few talking points about the new phone. He emphasizes features such as the speed of LTE connectivity and the devices huge honkin’ 4.65-inch screen. “It’s like having a movie theater in your hands,” said the Samsung rep.

And it’s not just big — remember, these things have to compete with Apple’s Retina displays. “HD Super AMOLED is recognized as the best display in the industry,” the exec says. “And it’s very energy efficient, so your battery will take you farther.”

7:20 pm, Pacific Time: Now, Google’s Matias Duarte is onstage in a suit that can only be described as pimptastic talking about whether machines have souls and how Android 4.0 saw a big shift in Android’s design language.

“While people like Android and need Android, they didn’t love Android,” he said. “We saw this as an opportunity.”

He said Google now wants us consumers to think of Android as enchanting, easy, something that makes you feel powerful and smart. (Sounds like the perfect trophy wife, but we’ll take a smartphone, too.) 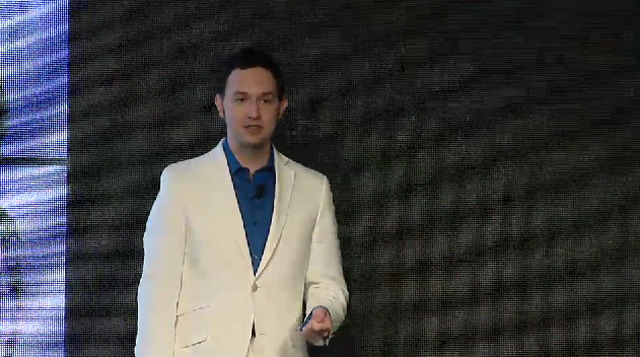 Tasteless jokes aside, Android’s new fonts (the typeface is Roboto), animations and gestural interactions will get your heart racing if you’re any kind of gadget geek at all. You can bet we’ll get going in-depth on Ice Cream Sandwich’s new user experience soon. Probably not tonight; more likely later this week when Googlers are available to dive into detail on how the new OS improves on the old.

UPDATE: That deep dive into design has been posted.

7:30 pm, Pacific Time: One cool new customization feature is folders, which can be organized and moved into the bottom navigation bar for easy access to specific contacts, apps and more.

And good night, nurse: Android finally has screen capture features. Finally you don’t have to download the SDK and tether your phone to get a simple screenshot. And all the fandroids said, “Hallelujah.”

The virtual keyboard also got a major facelift, with consistent copy/paste features, spellcheck and more. Talk-to-type features are also getting some improvements.

7:35 pm, Pacific Time: Remember when we told you that Google was cooking up some crazy facial recognition tech for Android 4.0? That’s part of screen unlock features now.

Hugo Barra is the director of product, onstage now to talk about core apps, photos and people. 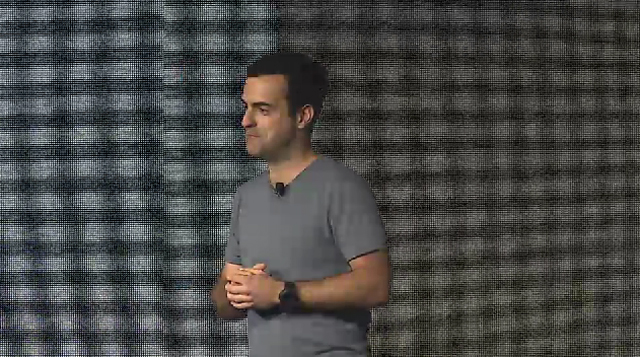 He is introducing some cool new web browsing features (seeing the desktop version of a site, saving pages for later) as well as some new Gmail features (a new “action bar” at the bottom for common actions, “chips” with names and avatars for your contacts).

Android 4.0 also gives users charts, projections and warning notifications for data usage, possibly preempting similar but marketing-based notifications from mobile carriers. In fact, you can choose to cut off your data access if you (or that pesky teenager on your plan) go over a certain data threshold.

7:45 pm, Pacific Time: Now, we’re talking about photos. Barra references the common wisdom, “The best camera is the one you have with you.”

In the demo (which was done with the new Samsung Galxy Nexus device), the camera app was noticeably faster to load and capture images.

But the speed isn’t the exciting part; Android is now out to dominate the photo editing space, too. “We like making our photos perfect, said Barra. “In Ice Cream Sandwich, we’ve added a powerful set of photo-editing tools so you can do just that.”

Barra then showed off what he called “hipster filters” (intended to give Market apps like PicSay and Vignette a run for their users’ money) and panorama features. 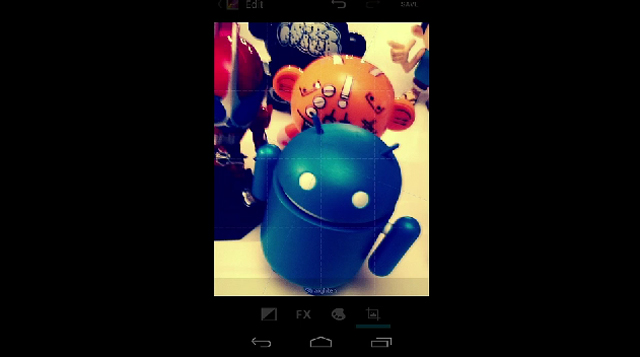 The new OS is also adding some good video capabilities, too, including time lapse, zoom while recording and more.

7:50 pm, Pacific Time: Next, Barra introduces the new People app, “the evolution of Contacts.” The People app features a magazine-like interface as well as integration with social services. Anytime you tap on a contact, you’ll have a range of options for getting in touch with him or her, assuming you’re connected via multiple channels (e.g., phone, SMS, Facebook and LinkedIn).

And when you do call someone, a full-screen image of that person will consume your screen.

“It’s not just a database of names and numbers; it’s a window into your social world,” said Barra. 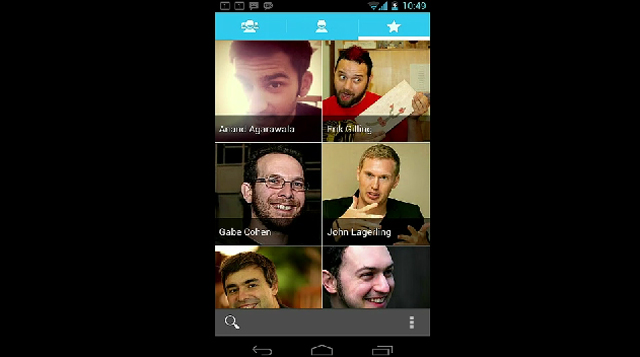 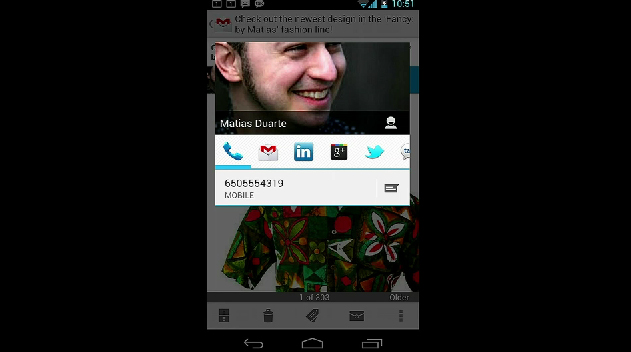 Sharing everything & the kitchen sink with NFC

“Android Beam makes it easy to share any content between Android devices in a simple, secure way,” he says.

Using the Bump-like Beam, you can share web pages, maps, games, apps, group chats — the limits haven’t really been explored. “We’re really looking forward to seeing what developers will do with this technology,” Barra concluded. 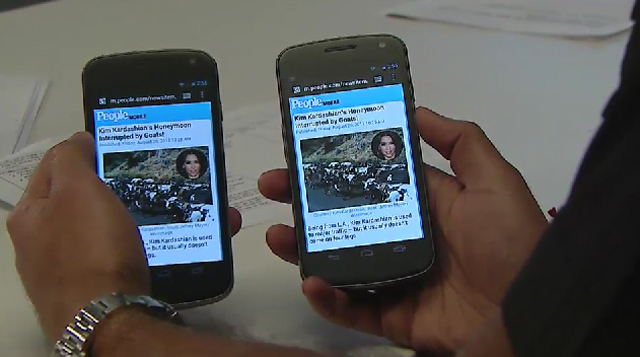 The event is over, and we’re in an Android-induced tizzy. We can’t wait to talk to Googlers about more design and feature details, and we definitely can’t wait to get our hands on a 4.0-running phone… or tablet.