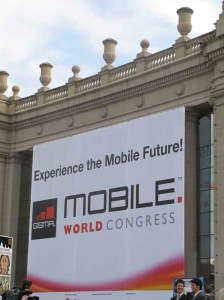 At last year’s Mobile World Congress I learned something: Given the amount of rumors leading up to the event, you usually don’t know what the conference is actually about until it’s over. That’s why I thought I’d share what I’m actually seeing at this year’s MWC, as the conference continues.

Here are my major takeaways:

Operators may be embracing Microsoft because they want to counter-balance Apple’s rise. I’m constantly overhearing conversations on the floor asking why operators and select device makers are supporting Microsoft’s not exactly exciting “me too” strategy. The consensus seems to be that they simply want to offer as many choices as possible, and that Microsoft offers an established alternative to some of the other platforms. If that is true, then this development is highly ironic. Consider that Symbian was originally an industry effort born out of fear of Windows becoming dominant in mobile.

At the same time, this MWC has the highest number of mobile consumer startups ever. That seems to be the consensus among conference veterans I talked to.

In related news, most U.S. infrastructure startups are here. And doing well — that’s based on three conversations I’ve had.

Likewise, venture capital talk is all about infrastructure, namely femtocells and backhaul opportunities. I’ve chatted with 15 VCs by now, and that’s how I would sum up what they are talking about the most here. These opportunities benefit from the trend of growing mobile data. There is a big market for opportunities that save operator costs associated with mobile data transfers. 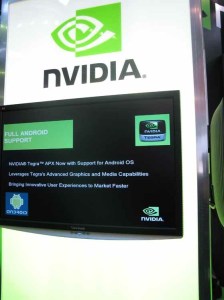 Google and Apple are missing in action, according to the media, but I count 19 Android devices. My VentureBeat press badge seems to indicate to media colleagues that I’m a good target to answer the question “Why aren’t Google and Apple here?” Initially, I was surprised by the question. After all, there are two Google stands and some Android folks around and about.

The left side of the HTC stand — where you can have a look at the HTC Magic (aka the G2) running Android — is this year’s free ice cream destination. I had a quick walk around and stumbled upon more Android phones (a Huawei model, a NVIDIA prototype and a General Mobile submission) and the marketing people at the stands I talked to gave me the impression that there are 15 devices coming from companies exhibiting here. I also attended a presentation by Google’s vice president of mobile technology Rich Miner today, during which he said that there are “multiple devices coming from four of the top five OEMs [original equipment manufacturers]” and that “many ODMs [original design manufacturers] have been showing devices to them.”

Also, while the companies themselves may not have a huge presence, many third-party company booths display ads showing their support for Android/iPhone infrastructure and apps. And at one of them, I bumped into an Apple employee in the process of checking out startups that are thinking about submitting apps to Apple’s App Store.

I suspect the expectations for this year’s MWC have been that the conference would reflect the momentum both Apple and Google have gained in the mobile sphere in recent months. But from my perspective, Google wants MWC to be about its open handset alliance (OHA) partners taking center stage. That’s what we’re seeing with HTC. And that’s what we’re seeing with Vodafone (the launch partner of the HTC Magic), which features some booth babes sending hordes of people between there and the HTC booth.

And Apple? Apple is Apple — they do what they want.

The development of the mobile web is further along than most people including analysts think. That’s based on four interviews from the content and advertising space.

Everybody in mobile content is presenting products around mobile social network (MSN) features. There are at least 4 MSNs working with device makers to work features like status updates directly into your phone’s address book. Again, that’s based on around 20 interviews.

Those are just some of the initial observations I have had here at MWC. Watch out for a followup piece in the next couple weeks.