“Android’s domination of global smartphone shipments reached a new peak in Q3 2013, with four out of every five smartphones now running Google’s OS,” Strategy Analytics analyst Scott Bicheno said in a statement. “Android’s gain came mainly at the expense of BlackBerry, which saw its global smartphone share dip from 4 percent to 1 percent in the past year due to a weak lineup of BB10 devices. Apple also lost some ground to Android because of its limited presence at the lower end of the smartphone market.”

In other words, no cheap iPhone. 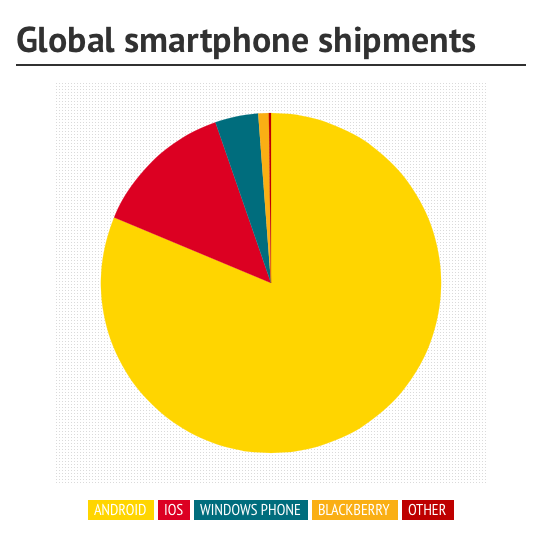 Meanwhile, Microsoft’s Windows Phone platform continues to grow, although on an as-yet small base. Microsoft shipped more than 10 million smartphones in a quarter for the first time ever in its history, Strategy Analytics said, and doubled its global market share in the last year. 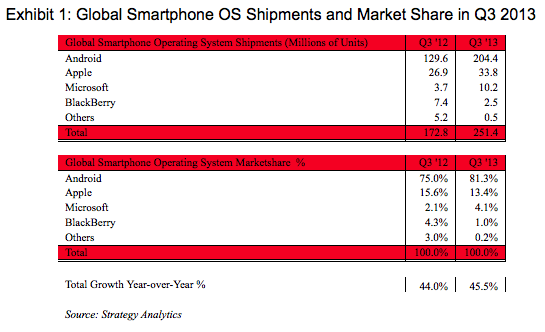 In light of Microsoft’s recent performance, that Nokia purchase may just make a lot of sense after all.

“Microsoft’s growth is almost entirely due to Nokia and its steadily improving Lumia portfolio across Europe, Asia, and the United States,” Mawston said.

Apple can take comfort, of course, in knowing that for most of the third quarter, anyone who knew anything about smartphones was waiting for the iPhone 5S and 5C to come out before making a purchase, so its numbers were likely artificially depressed and will rebound next quarter.

Still, a lack of a real threat at the low end of the market will continue to cost Apple market share, and while the company doesn’t measure success on market share, over time huge deficits in market share can only, you would have to believe, result in an inability to maintain an absolutely top-notch ecosystem — and a concurrent loss of value to the members of that ecosystem (iPhone owners).

Which then presents a long-term challenge to Apple — and to its investors. Almost a year ago I asked, “Can anyone tell me why this is not Mac vs PC all over again?”

At what market share percentage does Apple’s ability to maintain a competitive app, media, and accessories ecosystem start to decline? I asked Mawston.

Apple CEO Tim Cook may care more about making great products than getting great market share — although he’s not shy about boasting when Apple does attain instances of dominant share — but he may not be able to make great products if Apple doesn’t start gaining more share.