Google’s Android OS is (not surprisingly) still on top when it comes to smartphone market share in the U.S., according to a new Nielson report.

The report says Android now has 39 percent of the smartphone-OS market, with Apple’s iOS at 28 percent and RIM’s BlackBerry at 20 percent. Windows Mobile/Windows Phone 7 holds 9 percent, while webOS and Symbian both have 2 percent.

While Android dominates the number of units sold in the U.S., Apple’s 28 percent of the market is an incredible feat. Individual Android manufacturers can’t hold a candle to that, with HTC at 14 percent, Motorola at 11 percent and Samsung at 8 percent.

“Because Apple is the only company manufacturing smartphones with the iOS operating system, it is clearly the top smartphone manufacturer in the United States,” Nielson said. 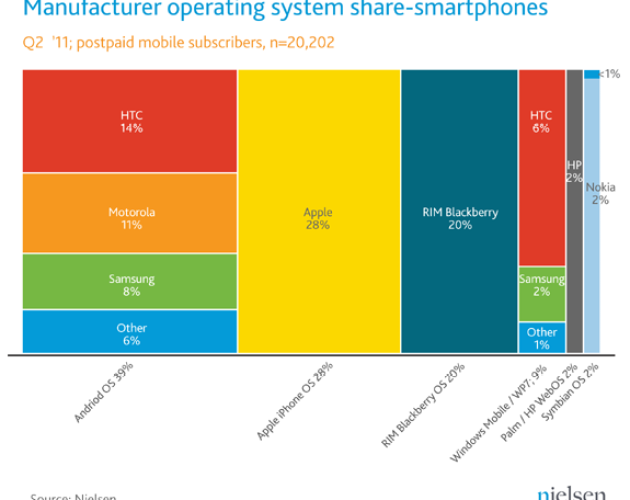 Android’s crazy growth in the U.S. market is notable but no singular Android device is comparable to the iPhone. Carriers often offer less-expensive (or free) Android phones with contracts, which attract consumers that don’t want to pay iPhone-level prices. Although AT&T has the iPhone 3GS for $49, consumers know a new iPhone model is around the corner. Several analysts have suggested a less-expensive iPhone model is on the way too, and that could help the iPhone reach even more customers.

If you had to buy a new phone today, would you choose an iPhone or an top-shelf Android device?