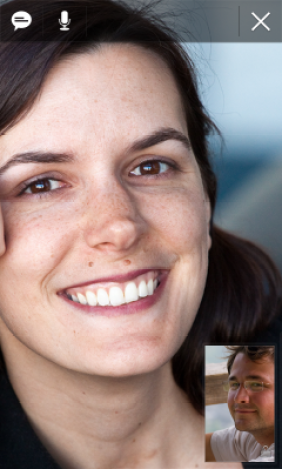 Google is finally making video chat a core part of the Android experience, almost a year after Apple introduced FaceTime video chat for the iPhone 4.

The company announced today that an updated version of Google Talk will bring voice and video chat to Android phones, starting with the Nexus S over the next few weeks.

We’ve known that Google has been working on an integrated video chat feature for months now. But Google’s timing couldn’t be any better, as powerful dual-core Android phones are finally becoming available, many of which can also take advantage of 4G networks.

In addition to being more flexible than Apple’s option, Google Talk will also overlay text sent via instant messaging on top of your video chat screen, so you can conceivably follow links sent during chats (as demonstrated in the video below).

I’m a big fan of the possibility of video chat on phones, although even Apple’s slick FaceTime hasn’t taken off (primarily because it’s chained to Wi-Fi). But there are indeed plenty of reasons why video chat could take off this year, in addition to the rise of 4G. Native video chat on Android should encourage more consumers to give it a shot, especially since it will be less trouble than signing up for another service like Qik. (At the moment, Skype only offers video chat on the HTC Thunderbolt, which runs on Verizon’s LTE 4G network.)

Google says the new Google Talk will arrive on the Nexus S with the Android 2.3.4 update over the next few weeks. It will show up on other devices running Android 2.3 and above in the future.