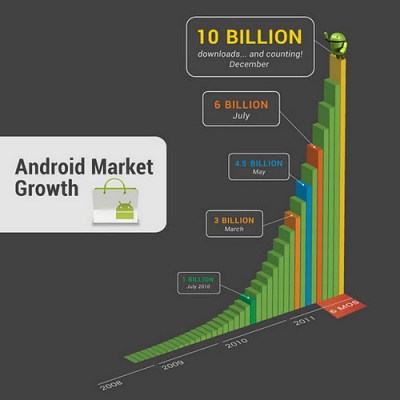 Google’s Android Market has exceeded 10 billion application downloads, with users now downloading at a rate of one billion apps per month, the company announced Tuesday.

By comparison, Apple reported more than 18 billion app downloads in October. The Android Market is hot on its heels, and we’re not surprised. Android now commands half of the U.S. smartphone platform market.

And you should expect the Android Market download figure to shoot up exponentially — and soon. App downloads are already rising at an accelerating pace, and there will likely be a flurry of post-holiday download activity as gift recipients fire up their brand new Android-powered tablets and mobile devices, and load them up with apps.

Android Market does, however, face app download competition from a growing number of third-party Android app stores, including Amazon’s own Appstore for Android.

Google is currently offering Android Market customers top Android apps at $0.10 a piece for the next 10 days to celebrate this achievement.