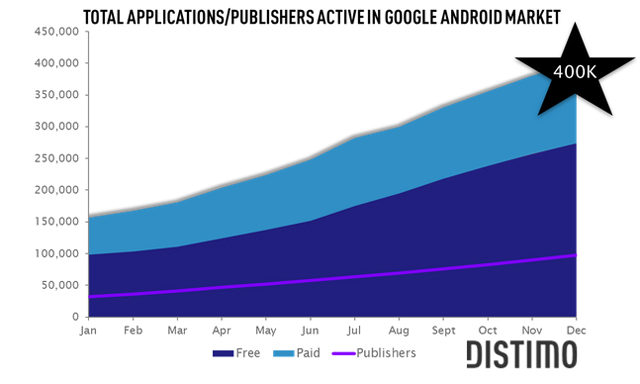 The Android Market has grown at a rapid pace, even with fragmentation issues that continue to plague the OS. The Market surpassed the 200,000 and 300,000 app milestones in April and August last year. Distimo said new free and “freemium” applications are the key to the surging numbers in the Market, and now two-thirds of Android apps are free.

By comparison, Apple’s iOS App Store currently has more than 540,000 active applications, according to 148Apps.biz. Distimo points out that it took two more months for the Android Market to reach the 400,000 app milestone than it took Apple.

Just last week, Microsoft’s Windows Phone 7 OS hit the 50,000 app milestone, which seems paltry in comparison to iOS and Android’s app battle. But Windows Phone 7 is younger than Android and iOS by a few years, so it hasn’t had as much time to grow.

In a final note on Android’s app numbers, Distimo said the Android OS now has nearly 100,000 publishers pushing out apps. Based on this number, each developer publishes 4.1 apps on average, while developers published nearly five apps on average a year ago. This means many more companies have sought to offer their apps on the Android platform, most likely as a second platform after iOS.