Google’s Android mobile platform is (yet again) the top-selling mobile operating system among recent cellphone buyers, according to August data from The Nielsen Company.

We predicted this would happen in August when Nielsen’s data showed Android outselling the iPhone, but BlackBerry-maker Research in Motion still held the top spot. Nielsen’s most recent data (see below) shows that RIM’s sales have fallen precipitously — down from 33 percent to 25 percent — while Android sales have skyrocketed to 32 percent. RIM and Apple are now duking it out for the No. 2 spot.

In August, a report from research firm NPD group also showed that Android had surpassed RIM. Now that both Nielsen and NPD data show Android as the sales leader, I think it’s safe to say that Google has trounced its competitors. Android’s momentum likely won’t be stopped either. New Android phones are constantly being announced, and eventually we’ll see Android overtake other operating systems like Symbian in less expensive feature phones.

As I’ve written previously, RIM’s loss was inevitable. It was originally king of the smartphones when they were favored by business users, but as smartphones approached mainstream popularity — first with the iPhone, and then with Android — RIM found itself unable to innovate.

Even the company’s current flagship device, the BlackBerry Torch, seems somewhat lackluster — it offers little that anyone but hardcore BlackBerry users would be interested in. RIM has an interesting ace up its sleeve with its BlackBerry PlayBook tablet and QNX mobile operating system, but even that isn’t enough to reclaim the top-selling spot.

In terms of total smartphone market share, RIM still leads with 31 percent, while Apple’s hold remains stagnant around 28 percent. Android, meanwhile, is showing significant overall growth — with an increase in market share from 9 percent in January to 19 percent in August. I suspect that Android’s overall growth will continue, the iPhone will hold its current position, and RIM will fall even further. 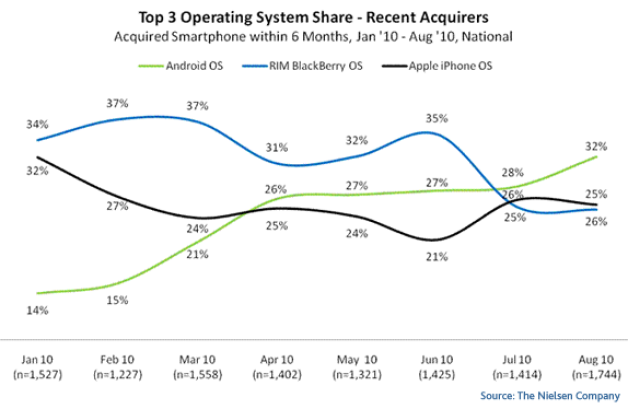