Research in Motion’s ad requests also continue to grow — they’ve jumped 16 percent since August, and 143 percent since January. Despite its lack of killer devices and the lukewarm reception of its latest flagship device, the BlackBerry Torch, RIM is definitely still a major presence on Millennial’s ad network. It’s the fourth largest device manufacturer with a 13 percent share, and the BlackBerry Curve is the third most popular phone on the network with an 8 percent share.

Looking solely at devices, Apple also maintained its lead as the largest manufacturer with a 30 percent share of the network. Motorola overtook Samsung as the second largest manufacturer with a 15.28 percent share, compared to Samsung’s 14.1 percent stake. Millennial attributes the popularity of the Motorola Droid as a prime reason for the jump (those numbers may also include the recently released Droid 2). Sony Ericsson jumped up two spots to the number eight position thanks to its Xperia X10 Android phone — a surprise since that device runs a very old version of Android.

Millennial also notes that feature phones saw the sharpest decrease among mobile device types, dropping 4 percent to 29 percent. It could potentially signal a trend of users replacing feature phones with smartphones, according to the company. That reasoning seems sound, particularly given that overall smartphone impression shares also increased 7 percent to make up 58 percent of Millennial’s network. 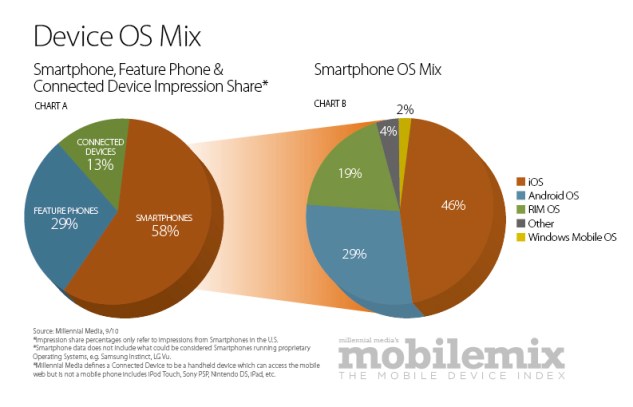