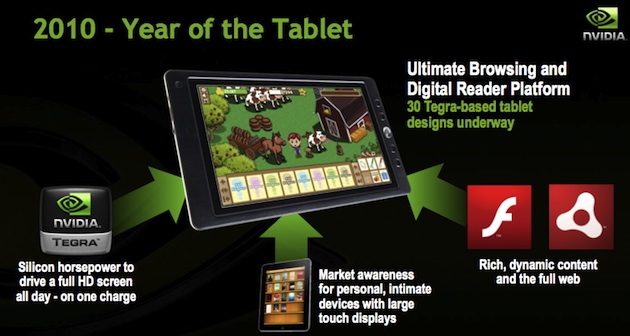 Apple is getting all the attention right now for its shiny new tablet device the iPad, but Google and its partners may be about to steal the spotlight. At the Mobile World Congress in Barcelona today, VentureBeat’s Matthaus Krzykowski had the chance to play with a tablet device using Google’s Android operating system, and he’s super-impressed.

What Matthaus saw was an application built on Adobe’s AIR technology running on top of Android. It was an app for Wired magazine built by the CondeNast Wired developer team. The presenter moved the tablet around, touched the device to focus on the magazine’s details, and so on. It was all quite cool.

The device in question is the ICD Ultra running on the next generation of Nvidia Tegra processors. More specifics about the device and the platform are coming on Wednesday, but for now we can tell you that it offers an incredible experience: This is a device that you will want to touch constantly, that you will want to hug. It includes a sleek touchscreen and an accelerometer.

Beyond this device, we may be at the beginning of an Android tablet invasion. But, of course, an operating system like Android needs more than cool devices — one of Apple’s big talking points for the iPhone and now the iPad is the variety of applications in its App Store. That’s why the announcement yesterday that Adobe is releasing a version of its AIR technology for mobile devices, starting with Android, should be significant — someone who builds apps using Adobe’s tools can now export them to the iPhone, the iPad, Android devices, and more. That applies to the tablet too, especially since Nvidia and Adobe worked together to optimize AIR apps for this device.

On a 20,000-foot level, this is a debate about native applications versus web applications on tablets. Adobe seems to think that Apple developers will not be able to build 100 million applications for the 100 million websites out there. AIR is more open and beneficial to developers in the sense that you don’t have to build a web application, then build a separate phone application. Instead, you build the web app in Flash, then offer it in the app stores for tablets and phones using AIR. Of course, Adobe has its own self-interested reasons for doing this, since all this web and app development would be taking place using its proprietary platforms.

It may seem puzzling that this efforts come from Nokia and Adobe, not Google. The search giant doesn’t appear to be focusing on becoming a high-quality platform for digital publications. That’s an effort that Adobe is better-suited for. Media and content providers are used to working with Adobe products like Photoshop or Illustrator anyway, so it’s easy for them to adopt Adobe products. With Android, Google may be happy to provide the platform, then let other companies like Adobe improve it.

Another argument that supports this thinking, which we’re hearing from device makers at MWC, is that the Android team is pretty bad at servicing all the hundreds of companies out there that want help from Google. The Android team simply does not have time and resources to deal with the requests. This creates space for third parties like Adobe to operate.